Are you interested in becoming a volunteer on an Ethiopia Build trip with Habitat For Humanity ? Have you thought of joining others from Northern Ireland to help improve the quality of life for others? In towns and cities in Ethiopia, more than 90% of homes are in urgent need of repair. The vast majority of families live in poorly built and cramped homes which lack basic facilities, such as proper toilets and clean water.
You can be part of the solution. Join others from Northern Ireland on Habitat for Humanity’s Ethiopia Build 2017 from 13th – 23rd September. You can apply on the Habitat NI website here.

Habitat for Humanity is a Christian housing organisation which welcomes people of all faiths and none to help build a world where everyone has a decent place to live.

The itinerary for the Ethiopia Build trip with Habitat For Humanity is as follows:

(Dates are dependent on flight availability.)

The budget for this trip is £2,200p/p. This includes a non-refundable deposit, travel, in-country expenses and a £700 minimum donation to Habitat’s work. Habitat encourage everyone to make a personal contribution towards logistics costs. Also to raise more than the minimum, as every penny makes a huge difference to families in need. For fundraising, there are lots resources to help you get started.

Habitat co-ordinates everything for a safe and rewarding experience. You don’t need special skills to take part.

If you need any encouragement to consider going on the forthcoming expedition, read the following report from Ballymena man, Raymond Kitson. In September 2016, he spent two weeks in Addis Ababa, supporting Habitat’s Ethiopia Partnership. He worked beside the local community to improve sanitation facilities in the slums. 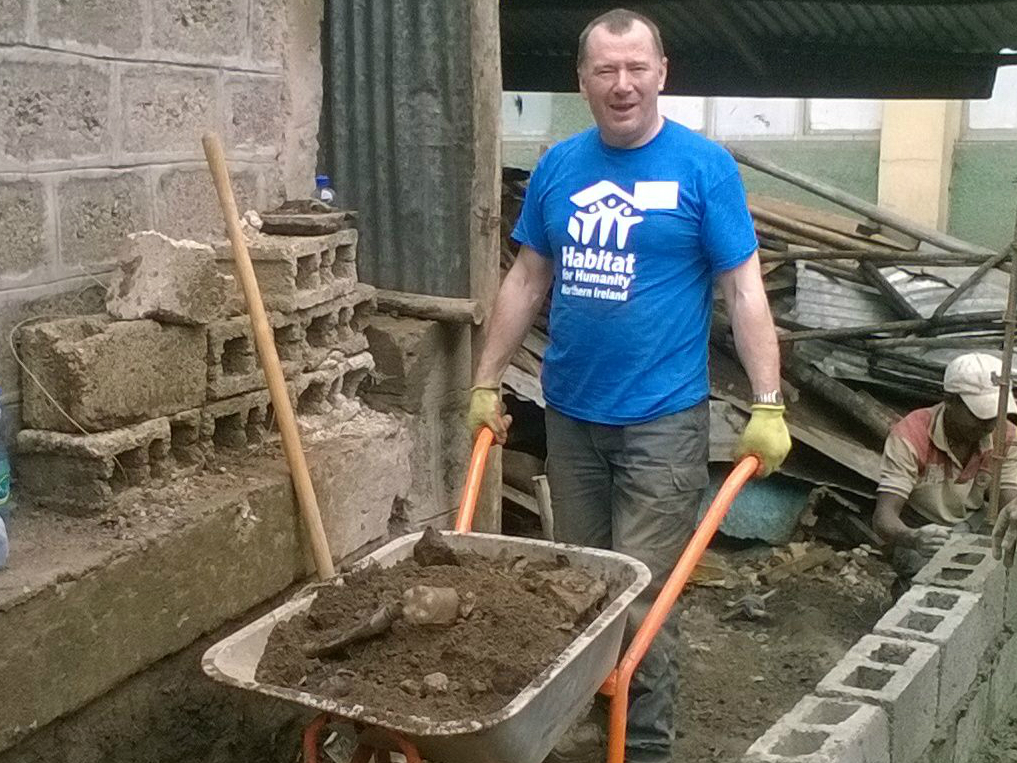 Raymond writes –
“After reading an article in a church magazine, I saw that Habitat for Humanity were looking for Global Volunteers to support their work around the world. I felt that this was a ‘call’. I believed I could make a difference, if only in a very small way. So I signed up for as Global Volunteer to work Addis Ababa, Ethiopia in August 2016.
My trip to Ethiopia was a humbling experience, witnessing true poverty every day. I was only a very small cog in helping Habitat for Humanity deliver a world where everybody should have a decent place to live and have access to proper sanitation facilities.

I joined a team of independent members, coming from different backgrounds from all over Northern Ireland. Everyone was a complete stranger to me. That soon changed, as we all became incredibly good friends. We were all were given various tasks that suited our abilities. I was responsible for looking after the transport department, which sounds grand! (although others may call it wheel-barrow duty).
Our team assisted in building two separate toilet blocks. One was at a local school consisting of 1600 pupils. The school had only six toilets between girls and boys.

It was hard work, but so rewarding.

With my background knowledge in the building trade I thought this should help, but I soon realised how easy we have it in Northern Ireland. I got my eyes opened, as everything has to be done by hand. From carrying the stones to mixing the cement, we had no machinery what so ever. The work was hard but so rewarding.
We were welcomed by the locals who were so excited to see us, and grateful that we were there to help build with them. They were so enthusiastic, always smiling, yet they have nothing – living in slums, with no facilities.
Although the school was closed when we first arrived, the new term began before we left and our team was able meet a lot of the children who will benefit from our work. The smiles on their faces said it all!

We did not see the finished build due to limited time of our trip. We did however get to see the progress we had made, from just the foundations to the block work at chest height. Our last day at the school was special as the team shared and celebrated the work achieved and the new friendships we had made with the locals, I will never forget them.

This trip is something I had wanted to do for quite a few years and would recommend it to anyone as Habitat for Humanity need you. I often say, “No one can do everything but everyone can do something”. This was such as humbling and rewarding experience and I would encourage everyone to sign up Global Volunteering as we can all make a difference.”

Remember the deadline to apply for this Ethiopia Build trip with Habitat For Humanity is 31st January 2017.