Ballymena lady, Joye Carson, is overjoyed by The Smiles Foundation Mission Trip she was on recently. Seeing for herself the progress being made there, she is praising God after the two-week expedition where she worked with The Smiles Foundation to help build new houses for the residents of Rapa, a gipsy village in north west Romania. 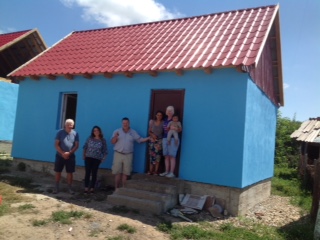 Joye, who recently marked her 60th birthday by walking from Larne to Portstewart over a five-day period was blessed with the opportunity to see how some of the £17,000 plus she raised through the trek is already making a real difference to some of the poorest people in Eastern Europe.
Along with her husband, Robin, Joye travelled to Romania in the company of 12 friends from Cloughwater Presbyterian Church and a further seven from the Mark Street congregation in Portrush.
On arrival, they were met by a group of nine fellow workers from America. Although Joye and Robin’s original companions returned home at the end of week one, the couple were joined by 13 members of Elwood Presbyterian in Lisburn for the second half of their stay.
Together, the visitors worked on a number of different houses which were all at different stages of construction. Some were at ‘foundation’ level, while others had to be painted, tiled or roofed. A few were completed and ready to be received by grateful residents. 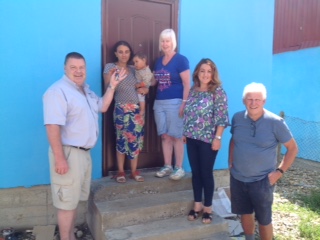 Joye remembered: “I was involved in a little bit of everything. I painted, built, tiled, laid foundations and cleaned up. The only thing I couldn’t manage was roofing as it was a little bit too high for me!”
Memorably, Joye and Robin were present when the house at which they had worked on most was handed over to a young family of three – father, Octavian, mother, Nicoletta, and a one-year-old girl who has the same name.
Smiles Joye: “The mum was just overjoyed with her new home. I also left them with a framed poster with the words; ‘Jesus loves me – this I know’ which we were able to translate for her. She was very emotional about that and hung it on her wall.” 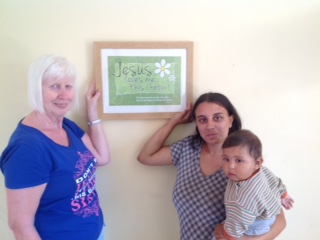 Although the new houses are basic by Western standards – each one comprising of a bedroom and a kitchen/dining area – the structures are nonetheless palaces to people used to living in rat-invested, crumbling shacks.
Importantly, the new houses all have built-in electricity, running water and a hot shower. Clean male and female toilets are just a few steps away in a communal ‘hygiene block’, which was also erected by The Smiles Foundation .
In addition to the building work, Joye and Robin also had the privilege of visiting some Old People’s Homes in the area.
What’s more, they also travelled to the village of Salard where they met with the Lupp family, whom they have sponsored for the last six years.
Recalling her visit, Joye said: “Salard is moving very slowly but the Lupp’s are a lovely family, consisting of a mum, dad and three wee boys. It has been a pleasure to watch them grow.”
Joye’s original plan was to raise £5,000 to enable the construction of one family home in Rapa. She was absolutely thrilled to get over £17,000.
This excess money will be used to part-fund an exciting new project. Revealing more, Joye said: “The people of Rapa are coming on by leaps and bounds spiritually. We have already seen eleven people baptised and one man wanted us to build the Church before finishing his home!”
“However, the houses will be finished before the Church.  The Smiles Foundation founder, Kevin, is hopeful that the new project will be ready for an official opening on 9th October.”

Overjoyed by The Smiles Foundation Mission Trip, but there’s still work to be done, and Joye asks for your prayers.

Joye requests prayer for this and for the ‘amazing and inspirational’ staff who work for the Smiles Foundation in Romania. They face a lot of discouragement but they pick themselves up and keep going despite various hiccups.
Also, pray for the people of Rapa. They have new houses and are growing spiritually. However, there is a lot of social work to be done because they need to be taught to live differently.
Joye adds: “They don’t know how to be clean or even cook a nutritional meal. Many of the children are running around with no pants or shoes and not one of them can read or write. We would love to build a school for them eventually. There is still lots for Smiles to accomplish.”

You can watch the featured video here of the church built by the Smiles Foundation at Tileagd and the baptisms at Rapa. If this has got you interested in finding out more about going on a similar mission trip, check the mission trip section of their site here. It will be a life-changer both for the people you help and for yourself through the experiences you will have there.