Organist Ian Barber’s contribution to the life of Belfast Cathedral over 35 years was recognised at a special Choral Evensong in St Anne’s Cathedral recently.
Ian was at the organ for the service and many warm tributes were paid to him afterwards. 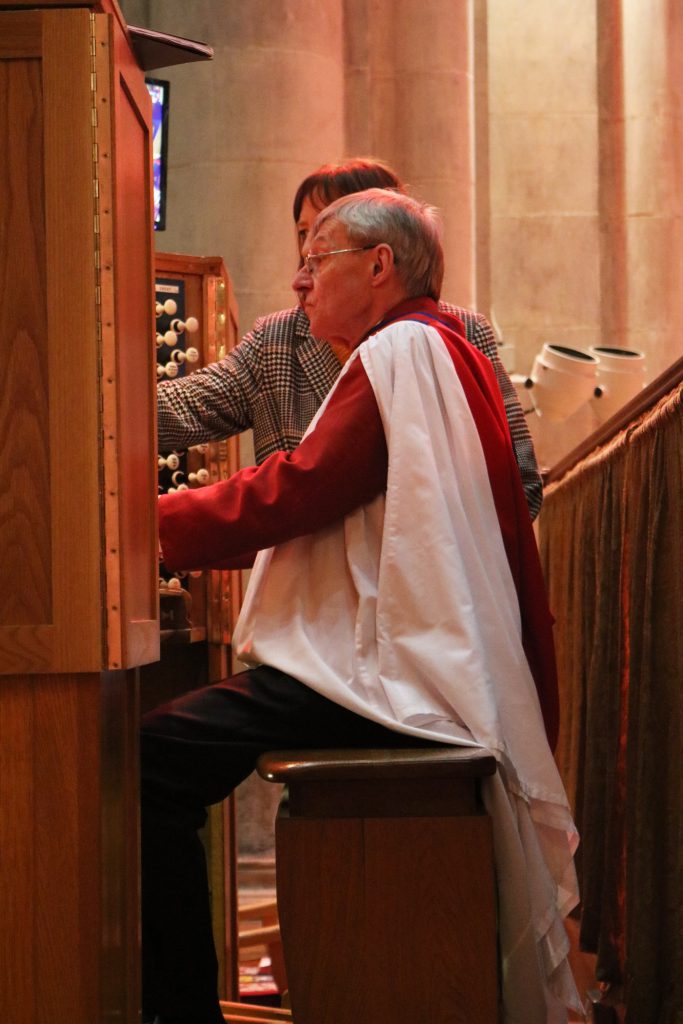 “I have only been in the Cathedral a short time but it has been a great privilege for me to work with Ian at regular services and also at special events which his playing has made extra special.
Someone described Ian’s playing as ‘swimming in sound.’ That sums it up! He has that touch that makes you inhale the music.”

Canon Niblock thanked Ian on behalf of clergy, past and present, for this ministry and his music with the Cathedral and the people of Belfast City and beyond.
He read some words from former Dean, John Mann and his wife Helen, who said it had been a privilege to know Ian as an organist and a friend.

Dr Michael Callender, a member of the Cathedral’s Music and Worship Committee, pointed out that Ian had been making music on ‘this quite ancient instrument’ for a full third of the life of the organ. He said Ian’s contribution to music in St Anne’s had been recognised when he was made an Associate of the Royal School of Church Music some years ago.
He paid tribute to Ian’s steadfastness, the way nothing ever bothered him, and described him as ‘a musical fixed point in a world of change at St Anne’s.’
“With Ian, we got the impression that the organist plays anything, no matter how complex, but clear preparation was the key before both daily Evensong and great occasions, including playing for the Queen on her golden jubilee,” he said.
Dr Callender also paid tribute to Ian’s wife Jean, who faithfully turned the pages for him at every service.

There were also tributes from Mr Philip Prosser, a former Lay Clerk in the Choir, who presented Ian with a gift of a mounted organ pipe. Mrs Joan Thompson made a presentation on behalf of the Friends of Belfast Cathedral.
The Bishop of Connor, the Rt Rev Alan Abernethy, quoted from John 1, describing Ian as ‘a man in whom there is no guile.’ He paid tribute to his ability, his humility and his incredible faithfulness. The Bishop said the Cathedral wished to honour Ian by making him Organist Emeritus and presented him with a Certificate and Medal.

Belfast Cathedral says farewell to organist Ian Barber, who thanked everyone for “the opportunity you have given me.”

In response Ian thanked the choir, the musicians and everyone present. He said much had happened in his time at St Anne’s and recalled services which particularly stood out for him, including the Kegworth Memorial Service, as well as happy Christmas and Easter times.
“Thank you to Jean because without her I could not have done this,” Ian said. “A page turner is a very demanding job, you have to concentrate, and Jean is wonderful in this respect,” he said.
Ian said he had been organist in St Anne’s under four different Deans. “I feel very lucky to have been here and thank you for the opportunity you have given me,” he said.

Son of a Church of Ireland clergyman, Ian grew up in Holywood and attended Campbell College. He cut his teeth on the organ in the parish of St Philip and St James, and won a scholarship to the Royal School of Church Music. He progressed to the Royal College of Music in London and after graduation was made a Fellow of the Royal College of Organists (FRCO) with a choirmaster’s diploma.
He moved to Canada to play the organ in St Mark’s Church in Ottowa. After two years he went to the Bishops’ University in Quebec to take a Degree in Theology and Clergy Training and when he qualified he moved to St Catharine’s, Ontario, as an organist.

Illness forced Ian to return to Holywood, and he was quickly snapped up by St Columb’s Cathedral in Londonderry as organist and choirmaster. After two years he moved to Ballywalter, and also taught at Victoria College and later Strathearn School, where he was Head of Music for 21 years.
In 1983 Ian was appointed assistant organist at St Anne’s Cathedral, a post he held until 2010 when he was recognised as organist and choirmaster. With the appointment of David Stevens as Master of the Choristers in April 2012 Ian resumed his role of organist.
In September 2014, the Cathedral’s new chamber organ was dedicated and named The Barber Organ in honour of Ian.

To read more news about Belfast Cathedral and find out what’s on, click here to visit their website.