An evening of Gospel Music with Sue Dodge at Glenmachan Church of God, Belfast on Thursday 22nd February 2018 at 7:30pm.

Headlining what promises to be a super concert will be Sue Dodge from the Gaither Homecoming Series. Joining her on stage at Glenmachan will be well-known family group, The Morrisons and talented soloist, Jim Lonsdale. 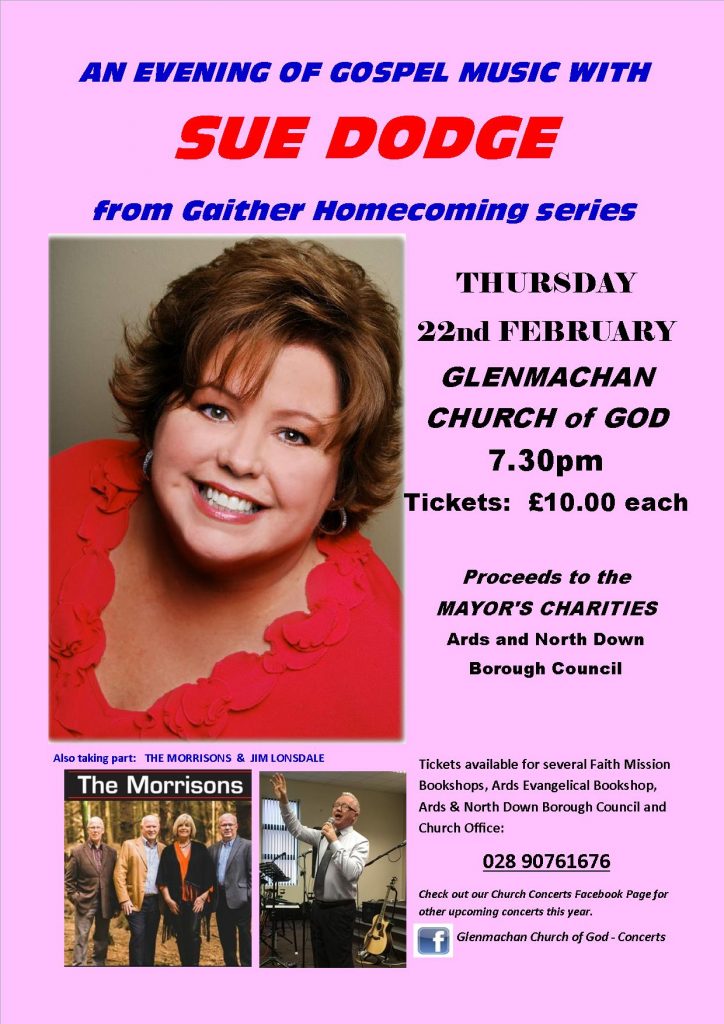 An Evening of Gospel Music with Sue Dodge at Glenmachan Church of God – Thursday 22nd February at 7:30pm.

Sue has received four Dove Awards for ‘Best Female Vocalist’. She has also been inducted into the Gospel Music Hall of Fame. Add to that four decades of singing Gospel music in 17 nations of the world only begins to tell the story of Sue Dodge.
She has appeared on countless national and international television and radio broadcasts.These include ‘In Touch’ with Charles Stanley, The 700 Club, TBN and of course the Gaither program.
Sue has sung for US presidents and to thousands of people across America and beyond. Perhaps the key to her ongoing success is that Sue has remained rooted in the local Church as a Pastor’s wife in the Virginian suburbs of Washington DC. Here, she and her husband Amos have recently celebrated 43 years of happy marriage.

“I want to let people know that regardless of the circumstances or situation that God is always faithful.”

The concert is being staged by the Mayor of Ards. Proceeds from the evening will go towards the Mayor’s Charities.

Tickets, priced £10 each, can be obtained from the Church Office at Glenmachan on 028 9076 1676. You can also buy them at North Down & Ards Borough Council, Ards Evangelical bookshop and several Faith Mission bookshops.
For further information visit Glenmachan Church of God Concerts web page here or their Facebook page here.