Operation Mobilisation 60th Anniversary Thanksgiving Tour comes to Belfast. A concert will take place at Belfast Waterfront Hall on Saturday 23rd September 2017. Featuring the New Irish Choir and Orchestra, the event will get underway at 7.30pm. This concert is part of the wider Thanksgiving Tour. 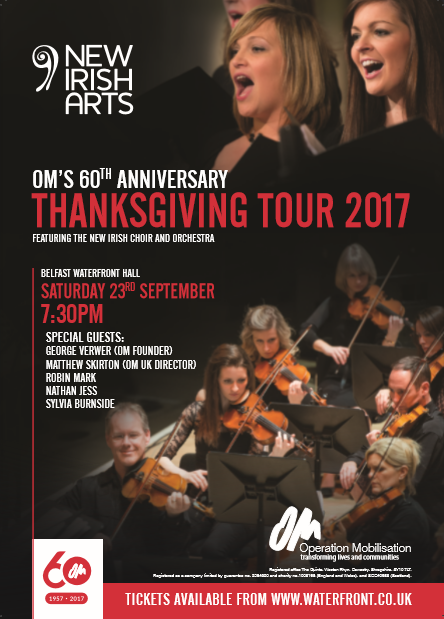 The Operation Mobilisation 60th Anniversary Thanksgiving Tour commemorates six decades of the organisation’s unique and life-changing work.
It began in 1957 when one woman’s prayers were answered as a young student gave his life to the Lord. That young man was George Verwer. George followed God’s call to share the Good News with the world. Hundreds responded and Operation Mobilisation (OM) was born.

It began with a handful of college students on a mission trip in 1957. Today it has 3,400 workers from over 100 nations in over 115 countries and a ship. OM remains a movement at heart, an ideal, a challenge, an invitation, a celebration, a family more impressed with the greatness of God than the size of the task.

During the Belfast concert, audience members will hear directly from OM’s inspirational, yet humble founder, George Verwer. Also on the platform will be the organisation’s current UK Director, Matthew Skirton. They will be joined by two of Northern Ireland’s top Christian singer/songwriters, Robin Mark and Nathan Jess in addition to Scottish songstress, Sylvia Burnside.

Tickets are now available for the concert which is part of the Operation Mobilisation 60th Anniversary Thanksgiving Tour. The event takes place at Belfast Waterfront Hall on Saturday 23rd September 2017, starting at 7:30pm.

This is certain to be an unforgettable night and tickets are available now. Buy online from the Waterfront’s ticket sales page here or phone 028 9033 4455.
To discover more about Operation Mobilisation log on their website here. If you’re on Facebook you can also find Operation Mobilisation UK by clicking this link.