The Presbyterian Church in Ireland (PCI) are holding their Luther 500 Conference on Thursday 2nd & Friday 3rd February 2017. This event is part of PCI’s commemoration of the 500th anniversary of the Reformation. Union Theological College (UTC) along with Queen’s University’s Institute of Theology are holding the joint two-day conference in Elmwood Hall, University Rd, Belfast. This event will look at the life of Dr Martin Luther, his teaching and legacy. Entry to the Luther 500 conference is free.

Laurence Kirkpatrick, UTC’s Professor of Church History explained. “The conference is for anyone who would like a deeper understanding of the principal driver behind the Reformation, key aspects of it and its legacy.
On 31st October 1517 Martin Luther nailed his 95 theses to the door of the castle church in Wittenberg, Saxony in order to begin a debate that ultimately triggered what we know today as the Protestant Reformation,” Professor Kirkpatrick said. “This seminal act has traditionally been interpreted as marking the commencement of the European Reformation, a period of unprecedented upheaval in church and society. It initiated the most dramatic reform movement in the history of Christianity.

While many people have a general idea of who Martin Luther was, the Luther 500 conference will provide an overall perspective of the man and his teaching. It will also unpack key elements of his thought which aim to deepen our understanding of the relevance of the Reformation for people in the 21st century,” he said. 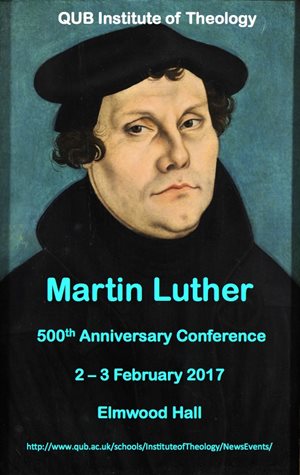 Lectures will be delivered by Union College staff and guest lecturers including Dr. Scott Dixon of Queen’s University’s School of History and Professor Mark Elliott from St. Andrews University. The conference keynote speaker will be Professor Mark Noll, latterly of Notre Dame University in the United States. In 2006, he was awarded the National Humanities Medal, by President George W. Bush.

The Luther 500 Conference, organised by PCI, will be held in Elmwood Hall, Belfast. Entry is free and takes place on Thursday 2nd and Friday 3rd February 2017.

“Professor Noll is a prolific author and many of his books have earned considerable acclaim within the academic community. Together with our other eminent speakers, we will examine Luther’s thought and teaching, the rapid spread of his ideas, his break with Rome and the development of the new Protestant theology.
We will also explore one of Luther’s most controversial writings, his advice regarding treatment of the Jews. The link with the atrocities of Nazi Germany will also be scrutinised,” Professor Kirkpatrick said.

Click here to see the two day programme in full.

No prior registration is necessary for Luther 500 Conference and is free to attend. Please share this and help to #sharetheconversation