The World Development Appeal 2016 has been launched in Belfast with the focus of ‘Reclaiming Hope’. The Presbyterian Church in Ireland’s (PCI) annual appeal will help projects in Central and South America this year.

Launched in the autumn of each year, the World Development Appeal (WDA) aims to raise £500,000 or more, for sustainable development projects overseas. All proceeds will be channelled through PCI’s aid agency partners, Christian Aid and Tearfund. This year the two projects that will benefit are based in El Salvador and Brazil. 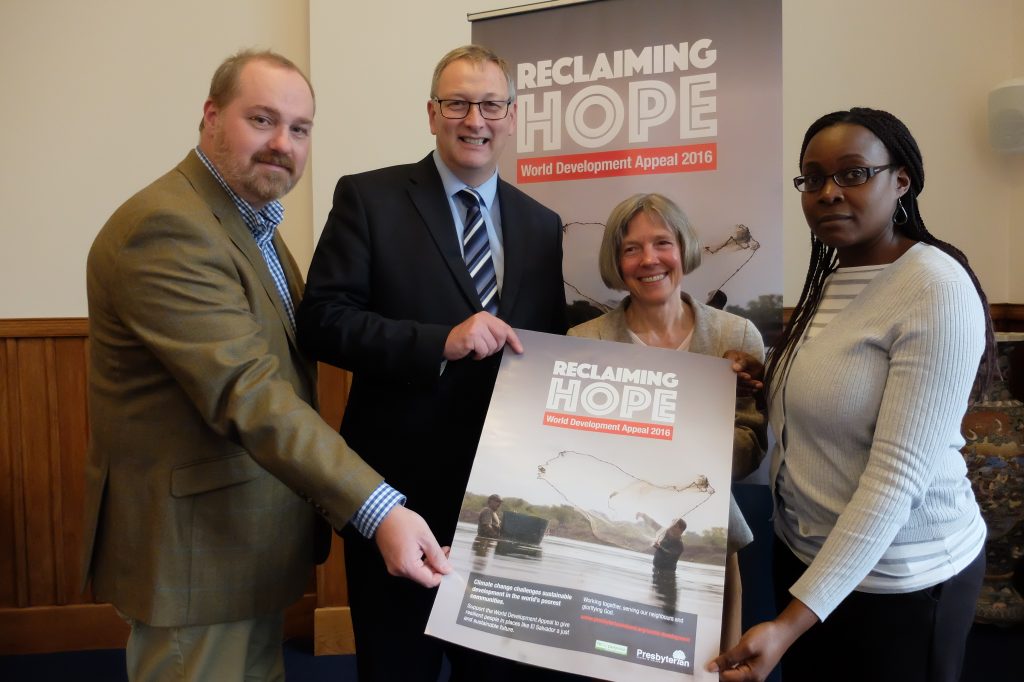 “The WDA, in its current form, began in 1980 in support of sustainable development work in some of the world’s poorest communities. Today the Appeal represents a long-term and generous commitment on the part of PCI members and congregations across Ireland to this work,” said Rev. Dr. Katherine Meyer, Convener of the Church’s World Development Committee.

“The theme for World Development Appeal 2016 is ‘Reclaiming Hope’ – a feeling that resonated with those we met in El Salvador and Brazil. This year highlights the additional challenges created for sustainable development in post-conflict situations. At the same time, we continue to focus on all the ways in which the effects of climate change continue to make themselves felt in almost every aspect of sustainable community development,” Dr. Meyer said.

Talking about each of the projects, the Minister of Christ Church, Sandymount in Dublin said that almost 25 years after the formal end to the 12 year civil war in El Salvador, the country is still recovering from the long-term aftereffects of the conflict.

“The high levels of poverty, which formed the background to the civil war, are still being played out in its aftermath. Our partner in the Central Amercian nation is the Programme for Capacity-Building and Reconstruction in El Salvador, known as PROCARES, which has been one of Christian Aids’ partners since 1998.”

“PROCARES is working with returning refugees who were resettled in the Jiquilisco Bay region on the country’s southern coast. In the face of severe climate volatility, ongoing coastal erosion, and ruined infrastructure, this new community began to reclaim the land. One way in which the community is building their own future is through a shrimp farming co-operative. This year’s World Development Appeal will support PROCARES and the El Zompopero Cooperative Society,” Dr. Meyer said.

Speaking on a video to support the appeal, PROCARES Director, Berta Aguirre, said, “From PROCARES and the Cooperative, we want to thank you for your interest in us. We know the work of the Presbyterian Church and we know that you have solidarity with us and that you give, so we can have a better life.”

World Development Appeal 2016 will support projects in El Salvador and Brazil. This year’s Appeal was launched with the focus on ‘Reclaiming Hope’.

The 2016 Appeal will also support ACEV (Evangelical Action) in Brazil, who are working with some of the country’s most isolated populations in the semi-arid northeast of the country.

“This part of Brazil has seen few glimpses of the rapid economic growth experiened in other parts of this vast nation. Here the climate is semi-arid, and for people living in the region, access – or lack of access – to water shapes almost every other aspect of their lives,” Dr. Meyer said.

“Working in partnership with Tearfund and local churches, the 2016 Appeal will help to support ACEV as it continues to focus on the provision of wells and their maintenance. Training in agriculture will also make the best use of the new water systems, as will the development of new planting and crops particularly suited to a dry climate. All this in partnership with churches whose own horizons are now expanding by moving out into the communities they serve.”

Welcoming the launch of the 2016 Appeal, Presbyterian Moderator, Rt. Rev. Dr. Frank Sellar said, “As those who belong to the Lord Jesus, we have a concern for His creation and people and when we see a need at home or overseas, especially when it comes to the poorest and most marginalised, we should be faithful and true to respond.”

“This is our 36th World Development Appeal and last year congregations across Ireland raised over £559,140 (€618,524) for projects in Bangladesh and Ethiopia, among others. I have no doubt that this same spirit of generosity will bless the people of El Salvador and Brazil, enabling them to reclaim the hope that we all seek.”

You can watch a couple of short ‘Reclaiming Hope’ videos here on the World Development Appeal 2016 page of PCI’s website.