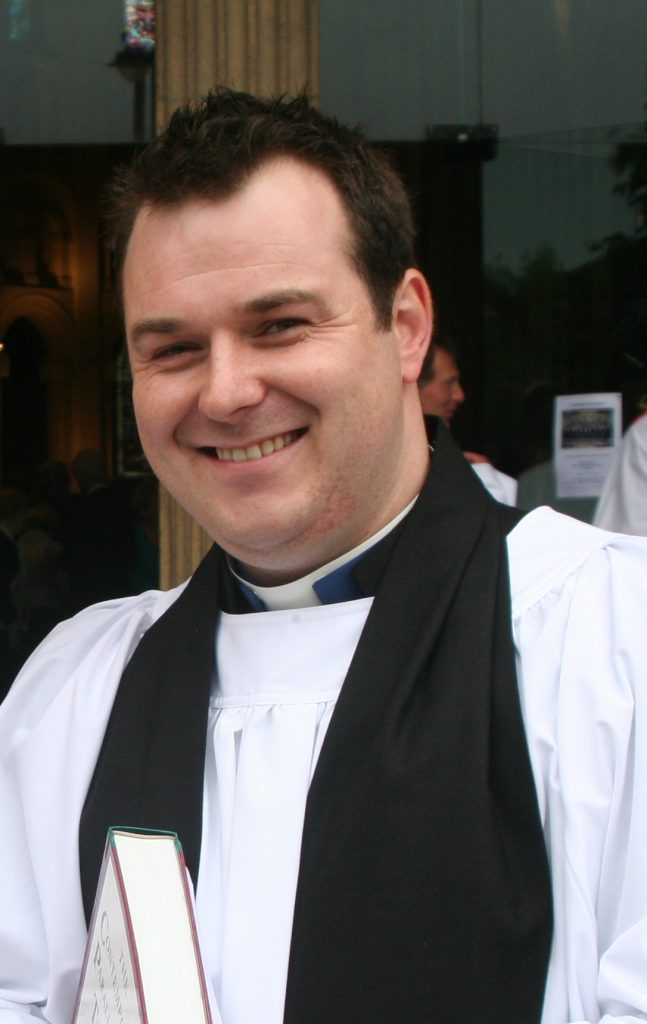 The expectant crowd looked on as the Bishop of Connor, The Rt. Rev. Alan Abernethy, conducted the Act of Institution. There was surely no-one else better qualified for this joyful duty, as it was Bishop Alan who originally sent Andrew for training before presiding over his ordination as a Deacon in 2012.

Canon Ronnie Nesbitt, who was Rector throughout Andrew’s Curacy at Bangor Abbey preached a challenging message from God’s Word while the readings were conveyed by Sally Stewart, Honorary Secretary to the Select Vestry at Bangor Abbey, Andrew’s wife, Allison and Richard Reade, a parishioner from Broughshane.
As he recounted his own story, Andrew recalled the blessing it was to be brought up in a Christian home. He and his brothers, Matthew and Timothy progressed through Church and Sunday School at North Street Presbyterian Church in Carrickfergus.

It was as a 16-year-old that Andrew committed his heart and life to the Lord at a mission in North Street. Although he will always be grateful for the teaching and faithfully ministry he received there, Andrew eventually found his spiritual home at the Anglican Parish of St. Nicholas’ in Carrickfergus. Indeed, it was during the final year of his primary degree course in Ancient History & Byzantine Studies that the Curate at St. Nicholas’ offered Andrew the opportunity to shadow him for two years when he was appointed to the Chaplaincy at the University of Ulster at Jordanstown.
Following a period as Student Worker there, Andrew returned to Nicholas’ as Youth Pastor as he prepared for his training for the Ministry at Union Theological College, Belfast and the Church of Ireland Theological Institute, which is attached to Trinity College in Dublin.
Andrew states that he was ‘extremely blessed’ to serve under two dedicated rectors during the course of his training, namely Dean John Mann at St. Anne’s in Lisburn and of course, Canon Nesbitt at Bangor Abbey.
Andrew also said: “I loved both of the parishes where I was placed. St. Anne’s Cathedral in Belfast was a wonderful place. I would say that same in Bangor Abbey, which was part of a provincial town. It was a great Curacy Parish because it had aspects of inner city ministry in the Kilcooley Estate. There was wonderful country, rural feel in Cladyboye Estate – it was a blessing to serve in two places that were so different.”

St Patrick’s Broughshane instituted new rector Rev Andrew Campbell at a recent service in the Parish Church. Andrew is ‘itching to get started’ in Broughshane.

St. Patrick’s in Broughshane has 200 – 250 families worshipping there regularly and promises a new challenge for Andrew.
He remarks: “In any walk of life caring for that number of people is a big responsibility but it is even more daunting when you remember that it is God’s Church. Paul talks about looking after the Church that was brought with the blood of Christ when he leaves the Ephesian elders in Acts and that brings challenge. It is an even bigger task when you realise the importance of these people; the creator of time and space was prepared to die for them. I can only fulfil my calling with the help of God.”
Andrew adds: “It is an extremely exciting time; my training has been building to this. Broughshane is a wonderful village and we are very much looking forward to serving there. I was sad to leave Bangor but now I am itching to get started in this new Parish.”
Outside of his Parish duties, Andrew is currently undertaking some post-graduate study. He is also a keen Arsenal fan who enjoyed watching Euro 2016. Time permitting, the new Rector also relaxes with his Xbox and in addition to spending time with Allison and their dog and cats.

You can find out more about St. Patrick’s Church Broughshane here. They’re also on Facebook here.

Toddle Along To Cloughwater Tea And Tots!