Popular Christian performer, Doug Anderson in concert at Glenmachan Church of God, Belfast on Friday, 24th June 2016 from 7.30pm.
A native of the USA, the all-county, all-state Indiana basketball player longed to become a college and NBA basketball star, but this standout athlete, who went on to play for Purdue University, actually aspired to a greater goal — to become a full-time gospel singer. 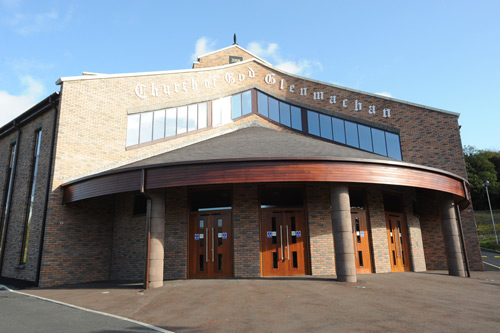 A member of a singing family, Doug’s first love was music, and he believed with all his heart that God would one day allow him to live his dream of becoming a full-time quartet member. That dream first became a reality when Doug joined a quartet known as Lighthouse. But his membership with that group led to another significant bend in the path when he connected with a young member of the legendary Cathedrals, a tenor named Ernie Haase.
Doug remembers: “We developed a pretty good friendship. We had a mutual love for quartet music and basketball. Knowing one day that the Cathedrals would retire, Ernie told me if he ever started a group, he would call me. A few years later he did.”
As an original founding member of the award-winning group, Ernie Haase & Signature Sound, Doug is happy to be singing night after night with a group that tours constantly, and is in high demand. But now Doug, with the blessing of his good friend Ernie Haase, has taken on new duties as a featured solo artist, in addition to his favorite roles as smitten husband, adoring father, and committed athlete.

Looking forward to the concert, a spokesperson for Glenmachan church said: “This will be a great night of blessing and we would love to see as many people there as possible to make Doug feel welcome in Northern Ireland.”

Get your tickets to see Doug Anderson in concert at Glenmachan Church of God. Available at the following outlets –

Tickets for the concert, priced £10 each are available from the Church itself or the Faith Mission shops in Ballymena and Coleraine.
After expenses, any proceeds from the concert will go towards the Church Building Fund.
For further details telephone: 02890 761676 or you can log on to the Glenmachan Church Of God website here or email: church-office@btconnect.com.