New Dawn Concerts are certainly building a reputation for bringing the best live Christian music to this region. Their latest gig which takes place this Saturday night, 9th April, 2016 at  7.30pm in The Adair Arms Hotel is no exception. 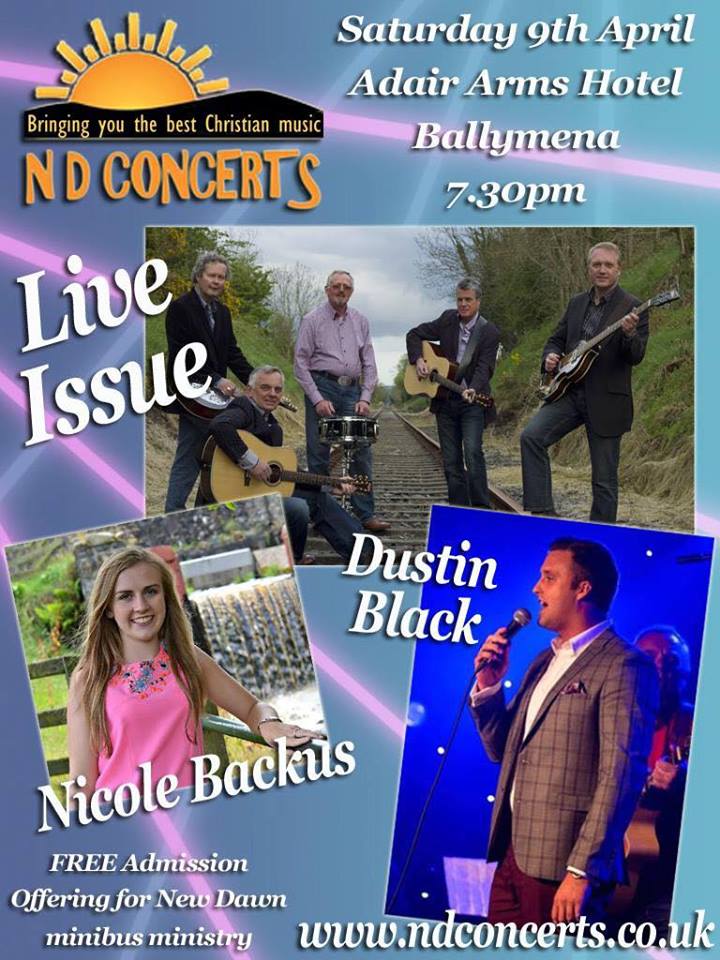 Headliners ‘Live Issue’ re-formed back in 2006. The band’s unique style of music and ministry has reached a whole new generation across Ireland, the United Kingdom and America. In that time Live Issue has released four albums, produced a DVD entitled “Life and Music” recorded live at Revelation TV in London, undertaken four very successful tours of the United States, including appearances on the Grand Ole Opry in Nashville and had the opportunity to record with many of the top American artists of Country and Gospel music. In February 2012, the group was invited to perform at the “International Festival of Country Music” held in the Odyssey Arena in Belfast. During this event Live Issue had the opportunity to share the stage with artists such as Reba McEntire, Ricky Skaggs and George Hamilton IV.
Also on stage will be America singer/songwriter, Dustin Black. A former tenor with the Mark Trammell Quartet, his music is firmly rooted in the authentic sound of Southern Gospel melodies.
Gifted young Ballymena vocalist, Nicole Backus will be adding a local flavour to proceedings. A prolific performer, Nicole recently sang at a fabulous weekend of worship with Revelation, Freedom Quartet and loads of other great artists!

Get along to The Adair Arms as New Dawn Concerts welcome Live Issue to Ballymena for a great night of Christian music along with Nicole & Dustin. Saturday’s concert kicks off at 7.30pm and admission is free – an offering in support of the New Dawn Bus Ministry will be taken.
To see all up-coming ND concerts and for more details, log on to ND Concerts website here.

Cherith Bell Releases Her First CD – His Life For Mine