Cherith Bell Releases Her First CD – His Life For Mine

Ballee-based singer, Cherith Bell  releases her first CD – His Life For Mine – at Whitewell Metropolitan Tabernacle, 837-869 Shore Road, Belfast BT15 4HS on Saturday, 9th April 2016 at 7.30pm.
Cherith would love you to join her on the night. Several well known local Christian singers and groups will also be taking part in the launch of Cherith’s new recording. 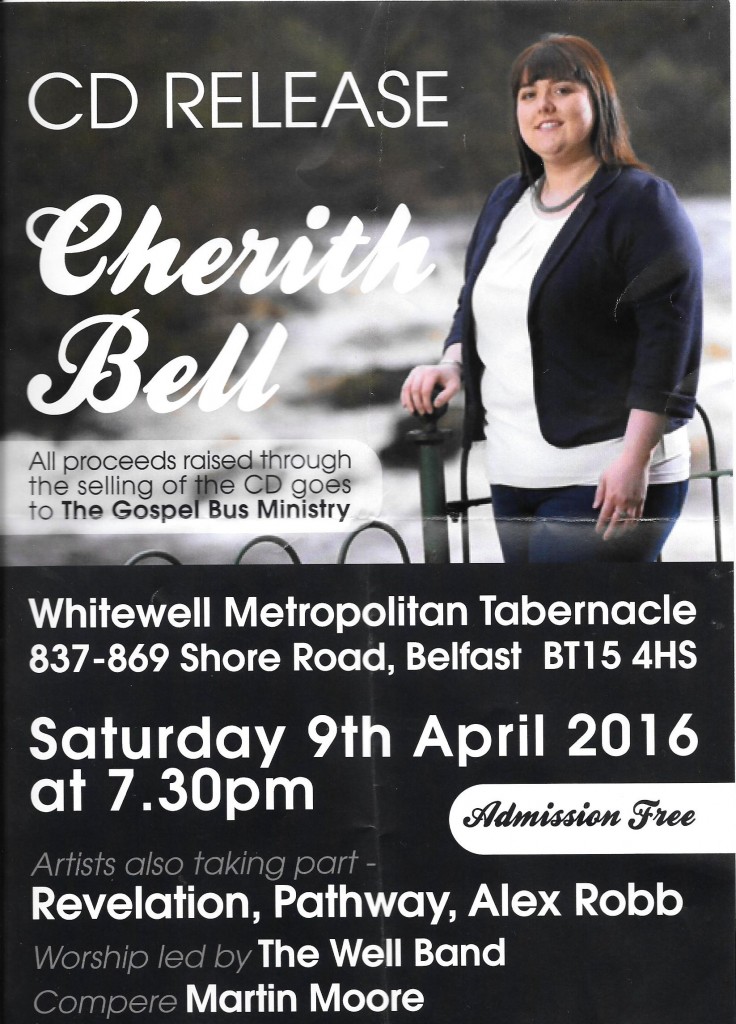 Looking forward to the night Cherith said: “I have enjoyed singing all my life and I have been singing in the Choir and at other Church and Christian events for the last six or seven years.”
The CD contains ten well-known tracks, including Phil Wickham’s ‘You’re Beautiful’, ‘There Is A Fountain’ by Selah and of course, ‘His Life For Mine’, a composition originally recorded by the Talley Trio.
All of the proceeds from the CD will be given in support of the Gospel Bus Ministry, which was founded by Cherith’s parents, Richard and Joyce.
She went on to say “Working with homeless people in Belfast on the Gospel Bus I see the need amongst people less fortunate than ourselves.” You can find out more about the work of the Gospel Bus Ministry here, which recently celebrated 10 years of ministry.

Cherith will be joined on stage by a number of top acts, including, Revelation, Pathway and Alex Robb.
Worship on the night will be led by the inspirational group, The Well Band and the compere will be popular Radio North DJ, Martin Moore.
Admission to the event where Cherith Bell releases her first CD is free and copies of the album – His Life For Mine – will be on sale at a cost of £10. For more information check out: ‘Cherith Bell’s CD Release’ event on Facebook here.