New Dawn Concerts are quickly establishing a reputation for bringing the best Christian music to our doorstep.
Their next gig, which takes place on Saturday, 30th January 2016 at the Adair Arms Hotel, Ballymena is no exception. Kicking off at 7.30pm, the line-up comprises of Simple Faith, Pathway, Paul Irwin and Lynda Lindsay. 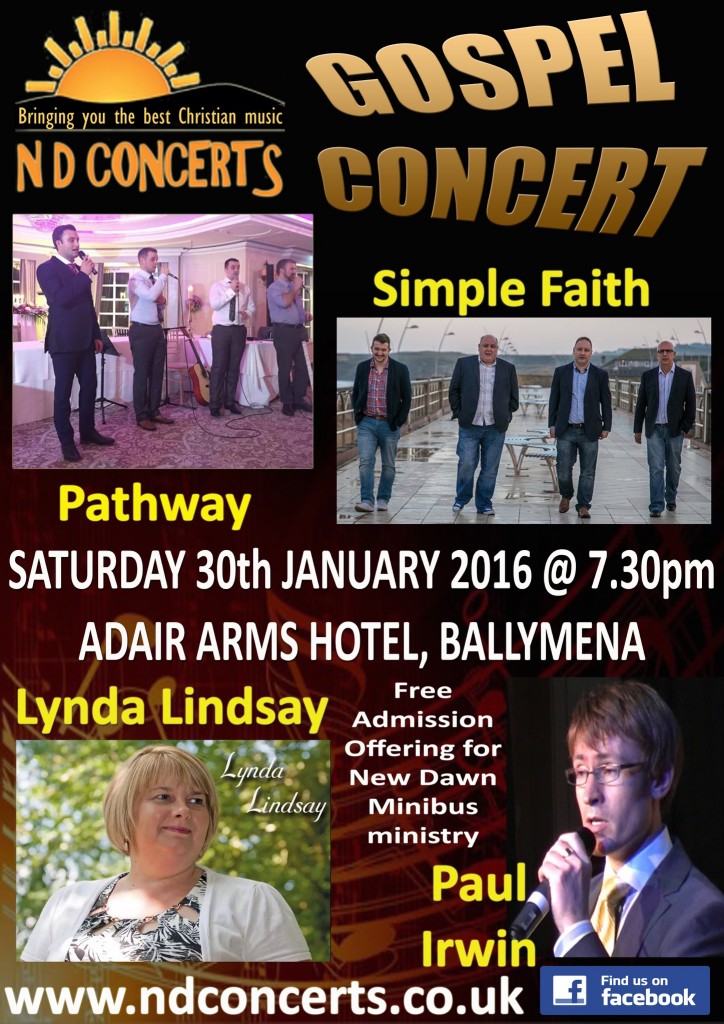 Established in 2003 as a part time Church group, Simple Faith are now in full time Gospel Ministry and have had the privilege of seeing over 300 people come and surrender their lives to Christ in 2015. Their aim as a Southern Gospel Quartet is to lift up on high the name that is above all names, the Lord Jesus Christ, with four powerful testimonies we can demonstrate Gods saving and keeping power, mixed with a sound that will up lift those that need encouraged and challenged in their most Holy Faith. Their sound is not limited to one particular age group, all ages can relate to their style of music.
Launched in 2010, Pathway features Dustin Black, (tenor), Matt Campbell, (lead), Peter Mander, (Baritone) and George Strange, (Bass.)
They describe themselves as ‘four young men who are passionate about Southern Gospel Music’. They travel extensively throughout Northern Ireland and the Republic and have just been to Asheville, NC, USA to record their new album.
Lynda Lindsay is an established Gospel singer who is in constant demand throughout Ireland. She is a popular recording artist who is regularly requested on local radio.
Paul Irwin first sang in public at the age of 16, in a mission not far from his home in Fivemiletown Co. Tyrone. Since that day he has served the Lord in song, in various places throughout Northern Ireland, the Republic of Ireland and Scotland. As well as an excellent vocalist, Paul is also an accomplished pianist and recording artiste.

Admission is free although an offering in support of the New Dawn Minibus Ministry will be taken.
For further information, log on to New Dawn Concerts website here. New Dawn are also on Facebook here.