Cold, dark weather conditions could not dampen the enthusiasm as Christmas Spark 2015 lights up Ballymena. The weather wasn’t going to deter the Christmas Sparkers as they lit up the town with the love of Jesus during the weekend’s activities.
Nearly 100 young people from churches across the district came together at Victory Praise Community Church in Pennybridge on Friday evening and Saturday morning as the outreach began with praise, worship and prayer.
Worship was led by James Russell and band & Stuart Hawthorne who is currently studying at Union Theological College encouraged the crew from God’s Word before they divided into their areas with the aim of being Jesus’ hands and feet in our town.
Easily spotted in their light blue hoodies, Spark members were active in Ballee where they delighted residents with their carol singing. 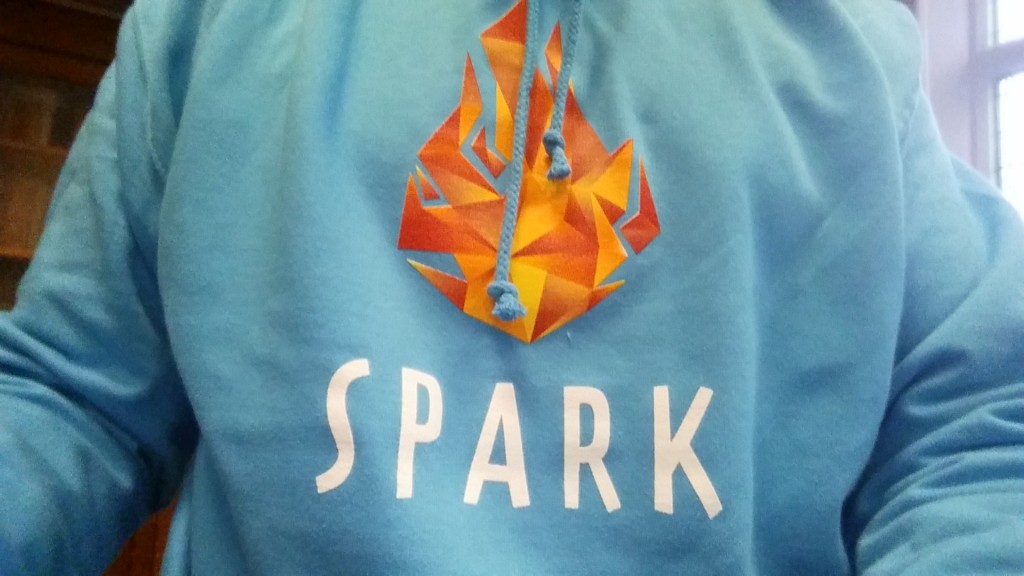 Dunclug Community Centre witnessed an amazing Christmas Party for children from the estate while Ballykeel sparkers went from door-to-door inviting residents to a local carol service.
A particularly active Doury team helped to serve lunch at the Beacon as well as providing tea and coffee at Hope House. Later that afternoon, they also found time to take a service at the Andenna Nursing Home.
A large Town Centre collective reached out to the heart of the City of the Seven Towers as they worked with West Church to deliver invitations to the congregation’s Christmas events. Door to door ministry was also offered, free umbrellas given to protect wet shoppers as the young sparkers shared their faith over a free bag of Quality Street!

The 20-strong team group in Portglenone had an amazing day as well. Team leader, Rachael Montgomery said: “We gave out Christmas cards to people we had met in the summer. Many of them had tea and treats for hours with their favourite ‘customers’ from the summer!! Ten members of the team went to Portglenone Fold and enjoyed a carol sing-a-long with the residents.
“We shared with them and had some tea and mince pies with them too. They were very grateful and one man commented that he’d be a Christian 50 years in August and never had God let him down. He said it was such an encouragement to see young people knowing Him.”
Rachel went on to say: “We also delivered mince pies, shortbread and non- alcoholic mulled punch to the people working in the shops, spreading Christmas cheer wherever we went! It was a great weekend for the young people to focus on God, renewing the promise of their heart to live for him and to spread His joy through the streets of our town.”
An amazing day concluded back at Victory Praise with the ‘Present’, an alternative carol service for the entire community.
Gifted vocalist, Bobby Spence led the band there while Jacob Gray and Lauren Hood sang a couple of inspiring solos.
Matthew Campbell gave a short talk from God’s Word which brought the message of Christ into sharp focus this Christmas time.
Summing up what was an amazing weekend, a Spark spokesperson said: “This year’s Christmas outreach was truly blessed as never before.”
“Team members reported having life-changing conversations of people’s doorsteps and there were some amazing opportunities for prayer.
The community events and services were well attended despite the cold weather and we know that God has planted seeds that will grow beyond our period of outreach during Christmas Spark 2015. It was amazing – to God be the glory and thanks”, they added.

Christmas By Candlelight in Portglenone