The Black Santa Sit-Out 2017 gets underway on the steps of Belfast Cathedral on Monday 18th December.
Don’t be surprised to see a Santa sporting L-plates! Dean-Elect, Archdeacon Stephen Forde, will be taking part on day one as he learns the ropes in preparation for becoming the bona fide Black Santa next year. 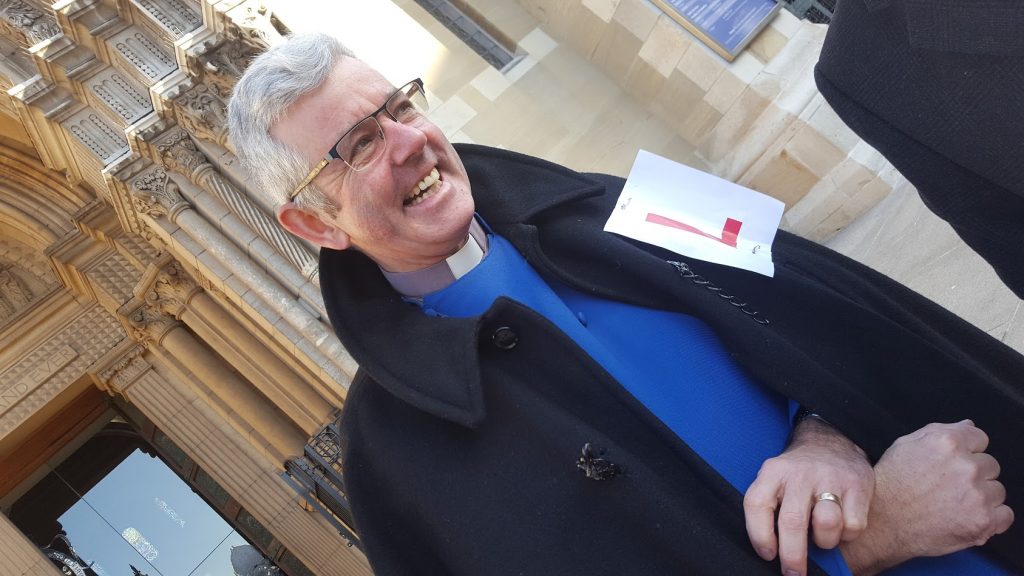 As the Cathedral is in the unique position of being between Deans over the Christmas period, a team of Black Santas will ensure this great Belfast tradition continues uninterrupted.

Dean’s Vicar, the Rev Canon Mark Niblock, said: “Over the past 41 years, this collection has become bigger than one person. This is a good opportunity to pay tribute to the staff and volunteers, Canons of the Cathedral and the two Bishops whose seats are in St Anne’s, who all contribute so faithfully to the appeal each year.”

“It will feel a little different but as at all moments of need, we know people will rally to support the Black Santa effort to ensure that it is a success and the charities receive their grants as in any other year.”

The Sit-out was founded by Dean Sammy Crooks in 1976 who wanted to raise funds for charitable causes. He sat outside St Anne’s Cathedral in the week before Christmas with a small barrel for donations, wearing his black, Anglican clerical cloak. The local press dubbed Dean Crooks Belfast’s Black Santa, the name stuck and so the annual tradition began.

The Black Santa Sit-Out 2017 at Belfast Cathedral will be on from 18th – 23rd December.

This year Canons of the Cathedral and other staff, dressed in black, will be on the Cathedral steps each day from Monday 18th until Saturday 23rd December.
Entry to the Cathedral will be free during the Sit-Out and people are invited to stop by to say hello to Black Santa and support the appeal. You can also take a walk around the Cathedral where there will be tea and coffee provided. Children can enjoy the beautiful crib.
Services will be held as usual, and visitors are asked to respect the quiet and the presence of others as they explore St Anne’s during this week before Christmas.