Rev Jackie Brown is ‘finding his feet’ as he settles into his new role as minister of Ballymena Congregational Church.
Sixty-seven year-old Jackie, originally from Belfast, has been ministering in England for several years. He has just returned after a 15-year spell as Pastor of the People’s Hall Evangelical Church in Bridgnorth, England.
He is married to Lila and the couple have two grown-up sons, Jackie and Paul. They are also proud grandparents to 17-year-old Natalie. 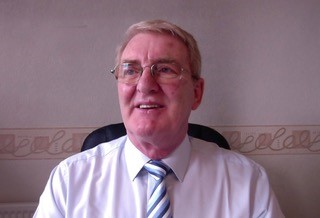 Jackie’s working life began when he left school at 15 and took a job as a message boy at Harland & Wolff in Belfast. Soon afterwards, the young man began to ‘serve his time’ as an electrician before going to work for Northern Ireland Railways. He ultimately returned to his trade for eight years before God sent him to Bible College.

Jackie’s personal journey with Christ began in the 1970’s. Looking back on this, he said: “In 1974/75 Lila and I were going through a bad patch. She felt it was the Lord so I said, ‘If you want to go back to Church, I will get saved and we will live a Christian life’. But we know it doesn’t work that way.
We started going to Church. I thought I was OK, but six months later we were back to the old way of life. Going to the club for a few drinks at the weekend and sometimes midweek too.
Then, in 1979, God started convicting Lila and eventually, she and I were saved by the grace of God on 5th June that year”.

Subsequently, Jackie and Lila became actively involved in the Church, particularly in Youth Work. After undertaking some training with Child Evangelism Fellowship (CEF), they began to run a Good News Club. Jackie then enrolled at Bible College full-time in 1981.
On completion of his course in 1984, Jackie and Lila spent three-and-a-half months at the training headquarters of CEF in Kilchzimmer, Switzerland before returning home to work for the organisation in North-East Down for three years, then a further five years in East Belfast.

Eight years later, Jackie and Lila were called to Sandes (Seaman’s and Airman’s Centres). They were based at Lisanelly Barracks in Omagh for three years before being ‘posted’ to RAF Cosford in Bridgnorth, a town in the English Midlands.
The People’s Hall Evangelical Church quickly became the couple’s spiritual home. Just two years after they arrived, the Pastor of the fellowship went into the early stages of Alzheimer’s Disease. Jackie was asked to preach a few times during that period. He was eventually appointed as Pastor there in 2002, a position Jackie held until his call to Ballymena Congregational Church last month.

Jackie explained how this move came about. “At the minute, I am chairman of the Evangelical Fellowship of Congregational Churches (EFCC). The Secretary of Ballymena Congregational Church phoned me about November/ December of last year and asked me if I knew any ministers who would be interested in receiving a call to the Church. We chatted and at the end of the conversation I said: “I don’t know what God is going to do but keep me in mind.” He phoned me in January and asked me to come and preach for them in February, which I did, and again in April. He called me again in May and asked me to Preach With a View. Two days after that, a members meeting was called and they took a vote. I think there were a couple of other men in the frame but they decided they would call me to the ministry and here I am!”

Jackie is ‘finding his feet’ but is settling in to life as minister of Ballymena Congregational Church. 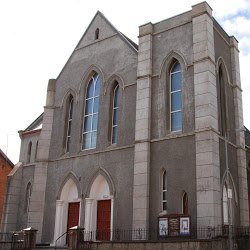 So far, Jackie and Lila seem to have ‘gelled’ very well with the ‘lovely and very kind people’ who make up Ballymena Congregational Church.
The former shipyard worker is ‘excited, if a little scared’ by this next chapter in his ministry but feels that his God-given life experiences have prepared him well for this role.
Jackie stated: “Obviously God is in it. I remember, when I was thinking about Bible College, speaking to an Elder of the Church in Rathmore Street Evangelical Church,Belfast. He always said you never rust out in God’s work, you burn out. So when it came near time, (63-64) and I was looking towards retirement I thought: “Well, we can do this and that but you do what God tells you.  God hasn’t told me to retire and I have still got a bit of life and ministry in me I believe, so I will keep going until He tells me to stop! I will be glad to stop, but at the same time I am more than glad to keep on going.”

“I am still finding my feet in Ballymena. If someone gives me a place name it goes into the Sat Nav! But I’m getting to know people in their homes & in their own environment. I would ask people to pray that God is in this. I believe that He called me, and so do the Church members, so we need to keep close to God and let Him take control of this”, Jackie concluded.
For more information on Ballymena Congregational Church visit their website or find them on Facebook.