The Church Page would like to offer our congratulations as Rev J B Mooney recently celebrated his 100th birthday. The big day was Friday 2nd June 2017. Rev Mooney is Minister Emeritus of Grange Presbyterian and a former Clerk of Ballymena Presbytery.

As far as we are aware Rev Mooney is the first member of Ballymena Presbytery to reach 100 years of age. A native of Belfast, he first served as a missionary in Nigeria. This was before entering the pulpit ministry with the Presbyterian Church in Ireland.

Joe is pictured, centre, with The Rev William Sinclair (Moderator of Presbytery) and The Rev Joseph Andrews (Clerk). They visited him to bring the warmest congratulations and good wishes from everyone in the Presbytery of Ballymena. 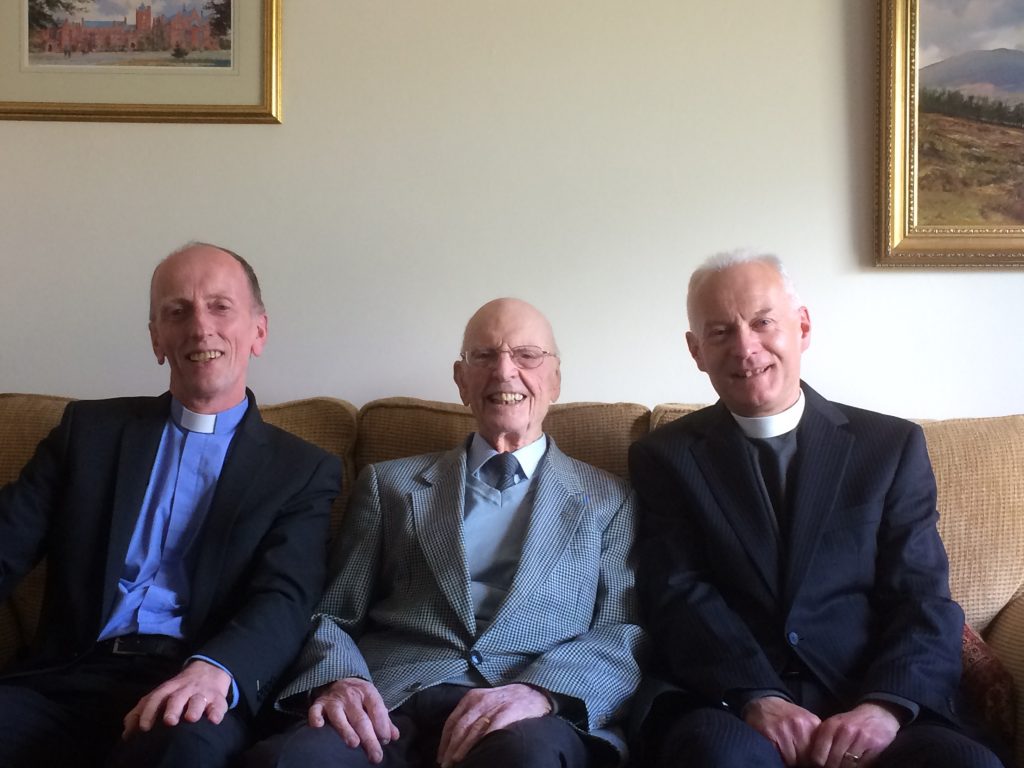 Rev Moody was also joined at his birthday celebration by Rev Colin Millar, current minister of the Grange and David Montgomery, who serves on the Kirk Session there. Moderator of the General Assembly, the Rt Rev Dr Frank Sellar, also brought greetings from the wider Church.

Rev J B Mooney recently celebrated his 100th birthday. He was invited as guest of honour to the recent Grange Children’s Day service.

On Sunday 4th June 2017, Rev Mooney was guest of honour at Children’s Day in Grange Presbyterian Church. Here he was also presented with a gift by the Deputy Mayor of Mid and East Antrim Borough Council, Cllr William McNeilly.

A hearty congregational lunch followed which Rev Mooney enjoyed in the company of his many friends from ‘the Grange’. His children Eileen and Gordon, who both grew up as part of the fellowship, were both in attendance.

“It was brilliant to have Rev Mooney back with us. He was able to meet up with couples he had married and others who had not seen him in a long time. It was a lovely day.”

Is Your Church Internet Security Up-To-Date?