New Single – Light Of The World by Angela Ifonlaja

A new single called Light of the World by Angela Ifonlaja has recently been released and is available to download. Belfast based Angela Ifonlaja is a seasoned worship leader, choir director and songwriter. She has partnered up with the legendary producer Goz-I-Am to produce this new single.

Light Of The World was released on 22nd May 2017, along with an inspiring, scenic video shot on location here in Northern Ireland. It was directed by the talented James Rea Jr. of Belfast Bohemian Productions. 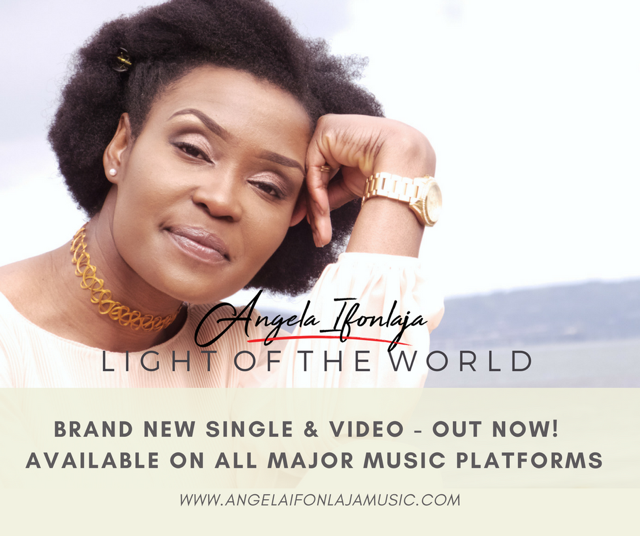 Angela released her beautifully written debut single Change in December 2016. Now she has produced another heartfelt single. Light of the World is a musical affirmation of who God is. It takes us on a lyrical journey into an appreciation of the infinite greatness of God and His power. The new single is an anthem of hope and victory in Jesus. Angela pours her soul into the vocals, creating and inviting every listener into an atmosphere of worship and adoration.

Ministry started for Angela at a young age as a Choir Director in her teens and a Youth Minister in her early twenties. She also sang with her sisters in a group called Eternal Excellence, releasing an EP in 2003. She honed her skills as a soprano singer in the world renowned, London Community Gospel Choir. Several years of experience in directing choirs in London and now the Youth Gospel Choir Northern Ireland, Angela’s passion for God is evident when she sings, as is her desire to be used by God.

Angela also pastors the Place of Victory For All Nations Church in Belfast alongside her husband, Chris.

The new single – Light Of The World by Angela Ifonlaja is now available to download.

Angela’s ministry has had a great impact in 2016 and the first half of 2017. It is therefore inevitable that many more lives will be transformed in the future by her latest release.

Light Of The World by Angela Ifonlaja is available to download on itunes and Amazon. You can watch the official music video using this link. Discover more about Angela’s music by logging on to her website here.

Then Sings My Soul | The Smiles Foundation