The Big Weekend 2017 | Ballymena and Broughshane

The Big Weekend  2017 is on Saturday 20th and Sunday 21st May 2017. The Big Weekend consists of three events over one weekend taking place at The Market Yard, Woodside Rd, Ballymena and Broughshane Community Centre. 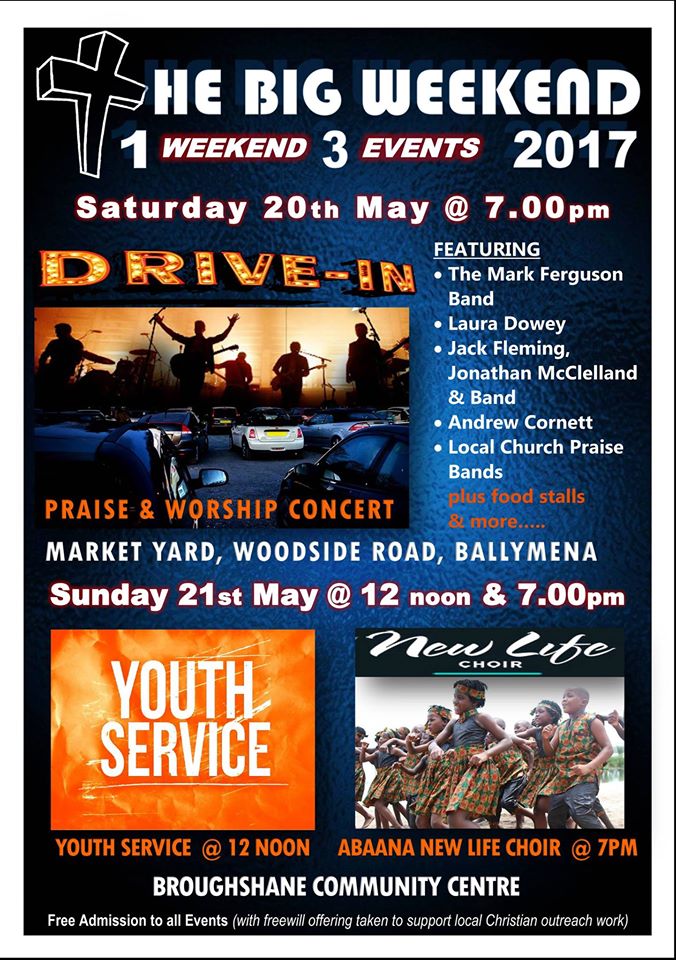 Everything gets underway on Saturday 20th May with a Drive-In Praise and Worship Concert. It’s taking place at the Market Yard, Woodside Road, Ballymena and starts at 7:00pm.

Numerous acts will be on stage. They include the Mark Ferguson Band, Laura Dowey, Jack Fleming and his band and Andrew Cornett. Also Geoffrey Lamont and Matthew Crawford and the ever-popular Andrew Calderwood. Come early, grab a bite to eat and enjoy the concert from the comfort of your car while the kids go and play on the GodmodeX gaming bus.

Sunday 21st May starts with a Youth Service at 12 noon in Broughshane Community Centre. The speaker at this service will be Simon Barr from Coaching4Christ.

Later on Sunday 21st at 7:00pm, it’s back to Broughshane Community Centre for a special time with the New Life Choir. This choir consists of twenty Ugandan children and has been put together and brought to N. Ireland by Bangor based charity Abaana. Their aim is to raise awareness of the plight of impoverished children in Uganda.

Admission to each of these events are FREE although a voluntary offering will be taken in support of local youth outreach work. For more information on The Big Weekend or any aspect of the New Dawn Evangelical Fellowship contact Gary on 07745027121. Check out The Big Weekend 2017 Facebook event here.