A Gospel Concert at Wellington Presbyterian Church Hall, Sourhill Road, Ballymena, will be held on Saturday 8th April 2017, beginning at 7.30pm.
This eagerly awaited evening has been organised by New Song Concerts. They are very excited about this pre-Easter music festival. 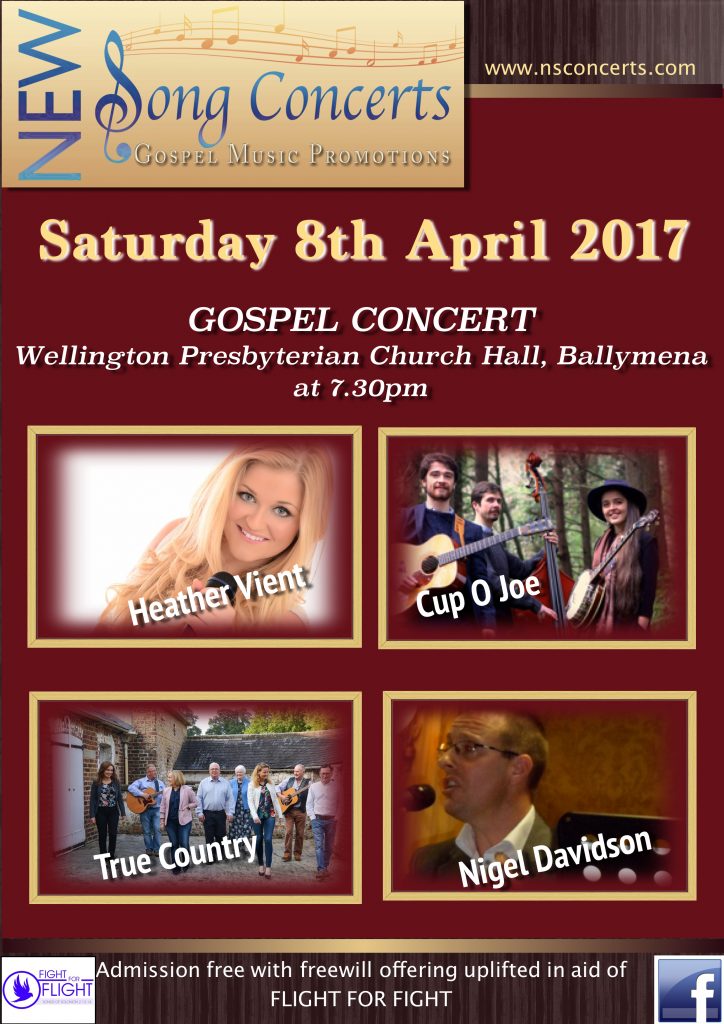 Their spokesperson told The Church Page.

“We are looking forward in anticipation to a fantastic evening of country and bluegrass gospel music. The event is on Saturday 8th April 2017 in Wellington Presbyterian Church, Ballymena. This promises to be a spectacular event! Taking part will be our guest artists, Cup O Joe, Heather Vient, True Country and Nigel Davidson.”

“Cup O Joe are a gospel music country bluegrass group consisting of two brothers, Benjamin and Ruben, and their sister Tabitha. Reuben on guitar and mandolin, Benjamin on upright bass, and Tabitha on banjo and fiddle. Their music is a fusion of hard driving Bluegrass with a mix of Jazz, Old Time and Swing which they bring in abundance into their gospel music.”

“Heather Vient from Lisburn is a new artist to NS Concerts. Heather is a very talented young vocalist and has been singing at Gospelfest last year. She also sang at the New Year’s Eve celebration hosted by Live Issue on 31st December 2016. You will be blessed by this fantastic voice.”

“True Country are a live country gospel band from Moy in Dungannon. They released their first album last year, “The Place Where I Worship.” This band are well worth hearing! The band consists of Neleen Currie, Ruthanne Neil and Ronnie Murray on vocals. Also Benita Curran on piano, Johnston Curran on steel guitar and rhythm guitar, Sally Murphy on electric organ and Robert Curran on Bass guitar.”

“Nigel Davidson is well-known to NS Concerts and has been with us before. A brilliant male vocalist from Magherafelt and a much-loved favourite around the Ballymena area. Nigel is often heard at concerts and churches across the province sharing the message of the gospel in song.”

You are invited to a Gospel Concert at Wellington Presbyterian Church Hall on Saturday 8th April 2017 at 7:30pm. The event is promoted by New Song Concerts and admission is free.

Admission to the concert is free, with an offering being taken up in support of Fight For Flight. This is an organisation, based in Brazil, which is working against the scourge of human trafficking.
For more information on New Song Concerts, log on to their website here. Also find them on Facebook here.
To get the lowdown on Fight For Flight, head over to their Facebook page here.

Owner of Allie Mae Craft Shop to Visit LESS ONE