Rev Victor Atallah, Director of Middle East Reformed Fellowship will be visiting Northern Ireland for a week of rallies. Victor has years of experience working in the Middle East. He brings a very different slant on what we might normally hear from the media and politicians.

Victor will be speaking at the following public meetings at 8:00pm each evening. 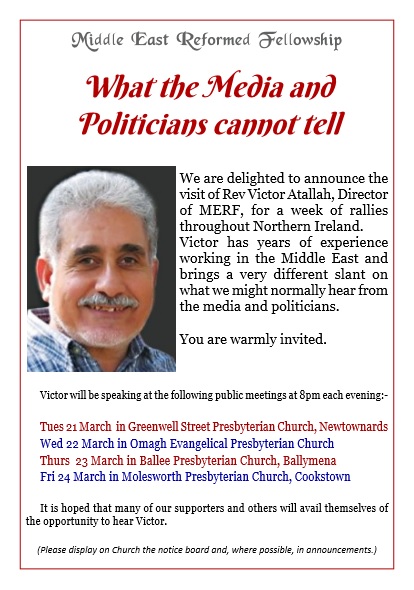 Did you know that there are almost 500 Reformed Churches in Egypt? Or that at present there are 19 church plants in the city of Cairo? Are you aware that in the Reformed Synod of Syria and Lebanon there are 25 churches? In fact, throughout North Africa and the Middle East, including the Gulf States, there are worshipping communities of Evangelical Christians. And these numbers are growing. While the media often presents us with bad news stories from Arab lands, Christians should be aware that today more and more Muslims are questioning Islam and many are turning to Christ.

MERF supports the churches of the Middle East, North Africa and other Muslim countries. This includes training indigenous church leaders at a number of training centres. Also by publishing and distributing Christian books in Arabic and other languages.

Indonesia has the largest Muslim population in the world, but the number of Christians has been steadily growing. MERF has been training pastors, elders, schoolteachers and other spiritual leaders.  Also we have been producing radio, television and internet-based programmes. Just now we are preparing Bible lesson books for children.

In Ethiopia we are receiving very encouraging responses to their Amharic and Oromo radio broadcasts. In neighbouring Somalia which claims to have an almost 100% Muslim population, the Lord is richly blessing our Somali gospel broadcasts. This targets hundreds of thousands in the Horn of Africa.

Hundreds of pastors and evangelists from South Sudan have been trained at our centre in Lokichoggio in northwest Kenya. Three times a year we hold four month sessions of biblical training provided by volunteer teachers from America, Holland and the UK, including a number from Northern Ireland. Also produced in Lokichoggio are our daily broadcasts in Nuer, one of the larger language groups in South Sudan. In the mainly Muslim northern Sudan MERF produces a daily hour of gospel broadcasts.

In Pakistan (reportedly 95% Muslim) MERF’s work continues among the 2,200 students in the four Calvin Academies. We are also assisting in a number of church-planting projects.

The population of 4.5 million in Lebanon has increased by roughly 2 million of mostly Muslim Syrian refugees. Here the local churches, supported by MERF, have been active in reaching out to these destitute people and are encouraged by the growing numbers of Syrian Muslims turning to Christ. In Syria itself we have been supporting a number of churches in Damascus and Aleppo.

MERF has two teams of broadcasters in Egypt and Lebanon who are trained in reaching Muslims with the Gospel. Medium and shortwave broadcasts along with online radio and websites reach millions in the 22 nations of the Arab League and other Arabic-speaking people in different parts of the world. One website nets over 25,000 a month of biblical material downloads. Issa-almasih Facebook page reports more than 305,000 ‘likes’, while the Dardasha7 online radio Facebook page reports more than 705,000 ‘likes’. The majority are from young people.

Rev Victor Atallah, the Middle East Reformed Fellowship Director, will be visiting Northern Ireland shortly. You are warmly invited to attend any of the rallies which have been arranged.

Would you like a speaker to come and tell more about this exciting gospel work at your fellowship? Please contact Ian at ian.mcclean@merf.ie. Also, feel free to check out the Middle East Reformed Fellowship website here.