The ever popular American Southern Gospel group, Ernie Haase and Signature Sound will return to Glenmachan Church of God on Thursday 4th May 2017 at 7:30pm.
They will be appearing as part of their Hymns and Happy People Tour 2017. 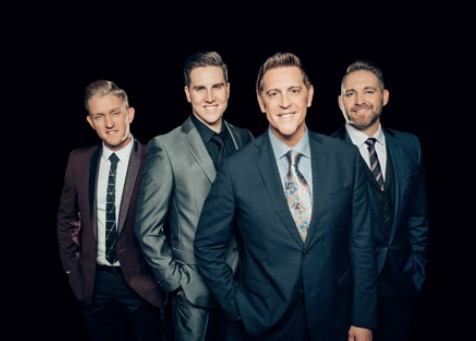 Ernie Haase and Signature Sound was formed in 2003. They are now one of the most popular quartets in all of Southern Gospel music. The group travels all over the world, offering energy, excitement and encouragement through its powerful brand of gospel music. They continue to gain new fans all around the world with their unique performances and unmistakable four-part harmonies.

The quartet have sung at concerts and sold albums to millions worldwide. From concerts in Latvia and India to South Africa and New Zealand. They have also sang at lots of concerts in their home country, North America, as well as TV appearances. Signature Sound is a world-renowned quartet that spans a wide variety of genres and cultures.
Group founder, Ernie Haase, is a creative & hard-working tenor. His early roots were with the unforgettable and legendary Southern Gospel quartet The Cathedrals. They helped begin his dream of forming a group of his own. Along with many appearances through the years on the widely regarded Gaither Homecoming Tour, his goal was soon accomplished. Ernie Haase and Signature Sound quickly gained an international platform in gospel music.

Ernie Haase and Signature Sound are coming back for another concert date at Glenmachan Church of God, Belfast. Get your tickets now for what promises to be a great night of Southern Gospel music. The concert is on Thursday 4th May 2017, starting at 7:30pm.

Everyone at Glenmachan is thrilled to be welcoming Ernie and Signature Sound back to Northern Ireland. This event promises to be another special night in their church calendar.
Further information and tickets are available from the Church Office on 02890 761676. Get the lowdown on Ernie Haase and Signature Sound by logging on to their website here. They are also on Facebook here.