Rt. Rev. Dr. Frank Sellar, the Presbyterian Moderator attends Hungarian Reformation celebrations this week. He will be accompanied by former Moderator, Very Rev. Dr. Ivan Patterson. Both ministers will travel to Debrecen, a designated Reformation City in the north-east of the country. They will join with leaders of the Hungarian Reformed Church (HRC) as it celebrates the 500th anniversary of the Reformation. 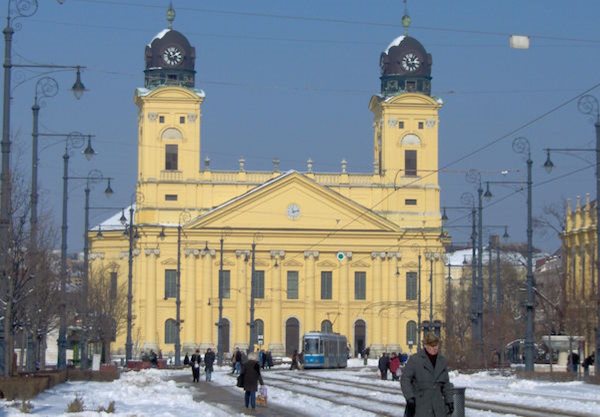 “This week I am looking forward to two events that celebrate the Reformation. Our own ‘Luther 500′ Conference taking place in Belfast. Also the 500th anniversary celebrations in the Great Reformed Church in Debrecen, where I will bring the greetings of the General Assembly,” Dr. Sellar said.

“The city is Hungary’s second largest and has rich connections with the Reformation from its earliest years. The ideas of Martin Luther and the influence of the Swiss Reformation lead the city to become known as the ‘Hungarian Geneva’ and ‘The Calvinist Rome’.”

“Through Ivan and others, PCI has established a strong partnership with the Hungarian Reformed Church. I am looking forward to joining with them and representatives from other European Reformed churches.  Some will also attend from further afield to celebrate the continuing legacy of the Reformation,” he said.

Known in Hungary as Magyar Református Egyház, HRC incorporates Hungarian Reformed congregations in and outside the country, in particular Romania, Ukraine, Serbia, Slovenia, Slovakia and Croatia.

The Moderator attends Hungarian Reformation celebrations along with Dr Patterson. The links he established with the reformed church in Eastern Europe go back to the 90’s.

Dr. Patterson’s relationship with the Reformed Church in eastern Europe goes back to 1994. As the minister of Newcastle Presbyterian Church at the time, the congregation established links with a Hungarian-speaking HRC church in Romania. “The Hungarian Reformed Church is made up of many Reformed congregations in Hungary and areas that were formerly part of the country prior to the First World War,” Dr. Patterson said.

“The HRC Presiding President, Bishop István Szabó, was our guest at the General Assembly three years ago and I look forward to meeting him again and joining with our brothers and sisters in celebrating this 500th anniversary and the ongoing development of our relationship with the Reformed Church.”

You can keep up to date on Dr Sellar’s trip on his Twitter feed here.