Talented young performer Matthew James McKay launches his new CD ‘Reason Enough’. He is holding a gospel concert to coincide with the new CD launch on Saturday 15th October 2016 at 7:30PM. He, along with Sandi MacLean & James Strange, will be performing at the Northern Ireland event in Living Hope Church, Shankhill Parade, Belfast. 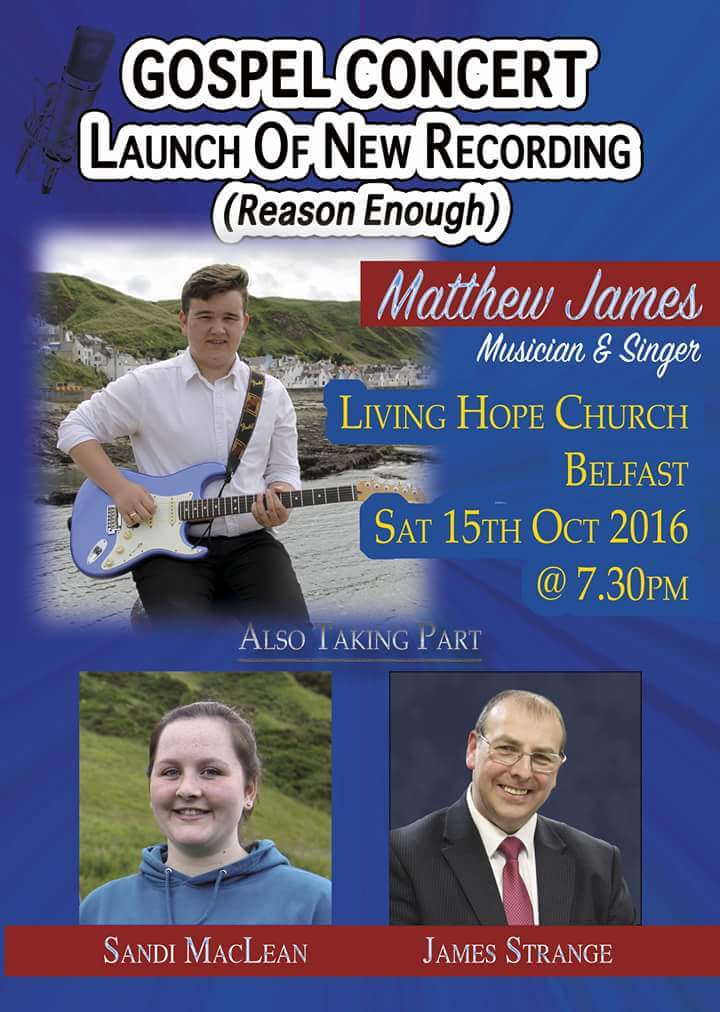 Matthew James is a 16-year-old lad from Gardenstown, north of Scotland. He has been singing since 2009 and had his first CD released in 2011. He has also been out to the Stamps Baxter School of Music in America working with Ben Speer (Gaither Music).

Looking forward to what should be a very special evening, James Strange of CRM Music (Ballyclare) told The Church Page, “This is his first recording project with us which also sees Matthew James doing his own acoustic and electric guitar work as well. Matthew James (or MJ as he is often called) has been over in Northern Ireland a number of times singing since he was just a lad. He has already had two release events in Scotland and we thought it would be great to have him over here for one too.”

Admission to the concert is free as Matthew James McKay launches his new CD. The concert is at Living Hope Church, Belfast on Saturday 15th October starting at 7:30PM.

Performing alongside MJ on the night will be his fellow Scot, Sandi McClean and James Strange, formerly of the Justified Trio.

So, if you want to enjoy a great night’s worship, head to Living Hope Church, in Belfast on Saturday, 15th October from 7.30pm. Admission is free, so please go along and support this young Christian musician and singer as he launches ‘Reason Enough’.
For more information on Matthew James McKay and his music check out his Facebook page here.
His website can be found here.