One of Northern Ireland’s best loved gospel groups Revelation celebrate their ten year anniversary!  They are holding a special ten year Anniversary Concert on Saturday 8th October 2016 to mark this milestone in their gospel music ministry. They will also be launching a brand new recording on the night. The concert is being held in the Craigavon Civic Centre and will be kicking off at 7.30pm. Other special guest singers plan to take part and the full line-up will be revealed on the night.
The gospel vocal harmony trio of three men, David, Thomas and Andrew all from County Antrim, have been together since the formation of the group back in 2006. 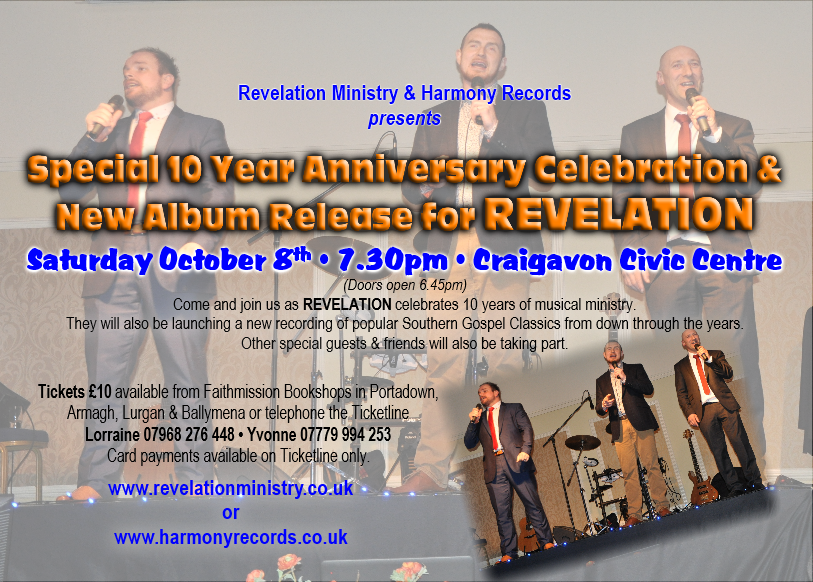 Since their formation in 2006, Revelation has been privileged to share the Gospel of Jesus Christ in song and personal testimony to countless thousands of people of every age bracket singing in venues large and small, touring all across Northern and Southern Ireland, the U.K. and America.

In 2010 they signed with the Elite Southern Gospel recording company, Crossroads Music, based in North Carolina and have produced four albums.

God’s calling, His abounding grace and guidance, prayer, commitment, dedication, hard work and brotherly love has kept these boys together for over a decade now.

As Revelation celebrate their ten year anniversary they are also ‘excited to see what God has for us in the future.’

Revelation told The Church Page, “We have found much joy and peace in serving our Saviour over the years. Time has passed so quickly and there is never a dull moment!! But we are so thrilled and excited to see where the group has come from over its short existence. We are excited to see what God has for us in the future, and knowing the Lord’s hand was and is in it all. The greatest reward we want for doing what we do, is to see precious souls won for the Lord Jesus Christ. It is Him and Him alone who is the cornerstone of our ministry.”

Why not come out and support them as Revelation celebrate their ten year anniversary. It will be an exciting night of unique harmony singing on 8th October in Craigavon Civic centre. Tickets are available at all Faith Mission bookshops in Northern Ireland priced at £10 or call the ticket line on 07968276448. Also check out Revelation Ministry on Facebook here for updates.