Gifted Gospel singer Tom McDonald launches his debut CD ‘In Christ Alone’ at The Sandel Centre, Knocklynn Road, Coleraine on Friday 15th October at 7.30pm.
26-year-old, Tom, who hails from Portrush told The Church Page that he had always enjoyed singing. His debut album was recorded at Cloud9 Studios in Belfast. ‘In Christ Alone’ follows a couple of well-received singles. 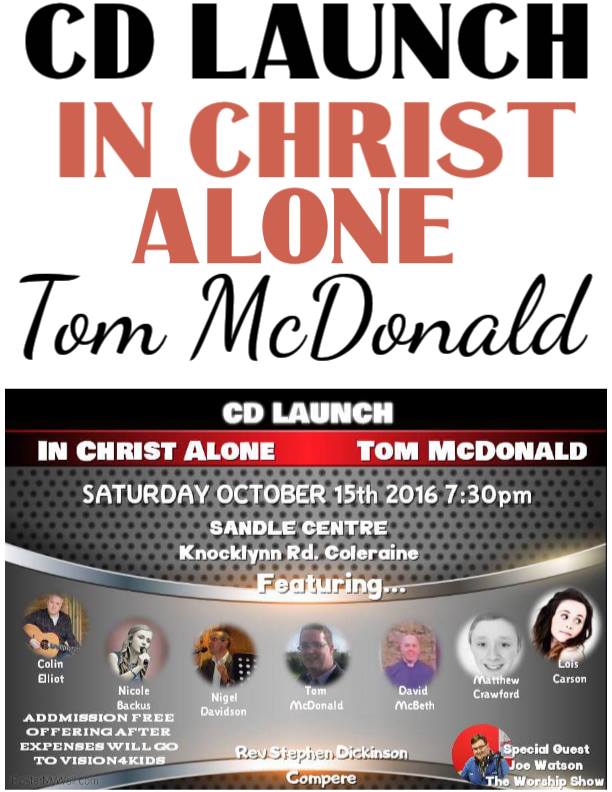 He adds: “I decided this time I would like to record a full album of my favourite gospel songs – some old, some new.
Joining me on the CD is a young man called Matthew Crawford from Ballymena. He recorded one of his very own hand written songs called ‘The Reason.’”
Tom says, “Also joining me on the recording was Lois Carson from Portstewart. Lois has been singing in church worship groups for a number of years. She has already recorded a song called ‘Shepherd’.”
Tom is grateful to both of these young artists for appearing on his CD. He is also keen to thank everyone at Cloud9 for helping to produce a top quality album and pays tribute to the Sandel Centre Coleraine where the recording will be launched.
This 11-track compilation includes some of Tom’s personal favourite’s such as ‘How Deep The Father’s Love For Us’ and of course, ‘In Christ Alone.’
All proceeds from the sale of this poignant collection will be donated to Ballymoney based charity vision4kids. A project which means a lot to Tom and his friends.
He smiles, “I’ve been friendly with Irwin Holmes and others from vision4kids for a number of years. I really enjoy seeing the passion and desire these people have to serve God.”
In a statement expressing gratitude to Tom for his kindness, a representative of the charity said, “vision4kids congratulates Tom McDonald on the production of this CD and would like to thank Tom for donating sales profits to vision4kids. All proceeds received will go to our project to build a Mission School in Kiambururu, Kenya. As with all our projects we seek to spread the Gospel of Jesus Christ amongst the boys and girls of that area. To find out more, visit vision4kids website or find us on Facebook here.”

You’re invited to a great night of gospel music as Tom McDonald launches his debut CD at the Sandel Centre, Knocklynn Road, Coleraine on Friday 15th October at 7.30pm.

Singing with Tom on his launch night will be Colin Elliot, Nicole Backus, Nigel Davidson and David McBeth, not forgetting Matthew Crawford and Lois Carson. Pastor Stephen Dickinson will compere the evening. All of these performers will be joined by a guest performer who is flying in from Nashville. You are encouraged to go along on the night to find out who this might be!
Admission to the event, as Tom McDonald launches his debut CD, is free although there will be a voluntary offering in support of vison4kids. Copies of the album will be on sale at the concert or afterwards via this website.