Members from the Northern group of churches in the Route Presbytery have organised this series of meetings based on the subject of Prayer from Monday 26th September through to Saturday, 1st October 2016. 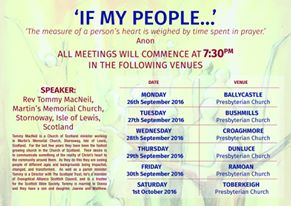 The times, dates and venues for the Route Presbytery series of meetings about prayer are as follows:

The speaker at each meeting will be Rev. Tommy McNeill, who is Minister of Martin’s Memorial Church, Stornoway, Isle of Lewis, Scotland. For the last few years it has been the fastest growing congregation in the Church of Scotland.

Their desire is to communicate something of the reality of Christ’s heart for the community around them. As they do this they are seeking people of different ages and backgrounds being impacted, changed and transformed.
As well as being a Parish Minister, Tommy is a Director with The Scotland Trust in addition to being a member of the Evangelical Alliance Scottish Council and a trustee for the Scottish Bible Society.
Tommy is married to Donna and they have a son and a daughter, Joanne and Matthew.

For more information on Martin’s Memorial Church, Stornoway, Isle of Lewis, Scotland, log on to their website here. Alternatively, you can find them on Facebook here.

Justified Invite You To Their Farewell Concert