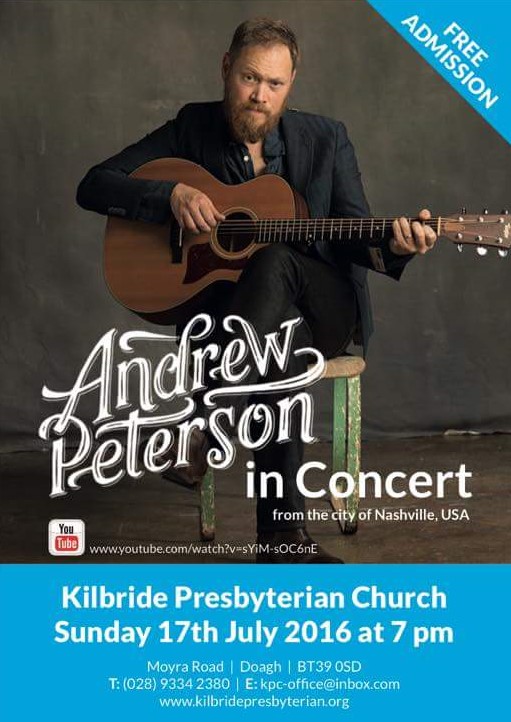 His bio says, ‘For more than twenty years now, Andrew Peterson has been quietly changing lives in four-minute increments. In Nashville where music is an industry in the same way fast food, generic greeting cards, and bumper stickers are industries, Peterson has forged his own path. He has refused the artistic compromises that so often come with chasing album sales and radio singles. Creating instead a long line of songs that ache with sorrow, joy and integrity, and that are, at the end of the day, part of a real, ongoing, human conversation.’

Talented performer, Andrew can be heard in concert at Kilbride Presbyterian Church for FREE.
Looking forward to the event, Kilbride’s Minister, Rev. Karen Campbell, said: “Andrew is a superb story teller telling his own story within Gods larger story of redemption. His music has the ability to convey the full spectrum of human emotion and brings us closer to God. This is a wonderfully generous opportunity given to us by Andrew.”
For more information on Andrew Peterson have a look on his website here where you can also connect to his Youtube channel to hear some of his music. He’s also on Facebook here.
To keep up to date with Kilbride Presbyterian Church, take a peek at their website. If you have any queries about the concert you can email: kpc-office@inbox.com

If you’re unable to go to Andrew Peterson in concert at Kilbride Presbyterian he will also be in Scrabo Hall, Newtownards on 15th July and Ballywillan Presbyterian Church, Portrush on 23rd July.