Ballymena couple Andrew and Heather Lytle report from France as their adopted home is currently buzzing with Euro 2016! We thought this was a perfect time to catch up with Andrew & Heather, currently serving as missionaries in Nantes with their young son, Mattieu. We are very grateful to them for sending us the following article. 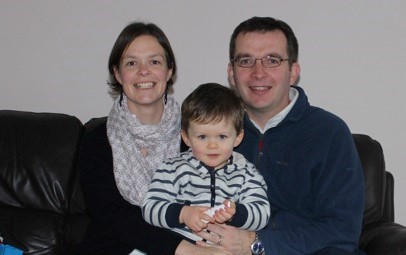 Andrew and Heather Lytle report from France –
“If you spend any time following current affairs and news, you’ll have noticed that France is once again very much in the news. Readers from Ballymena will have been following the fortunes of Cullybackey’s very own Steven Davis and the Green and White Army whose performances on and off the field have won the hearts of many of the French. Talk about football songs with anyone and they will know that Will Griggs is still on fire!
Sadly however, behind the celebrations of the football tournament, France has also been in the news for less positive reasons. The already unpopular government has recently pushed through a reform of labour laws, a move which has been met with mass demonstrations and strikes. Nantes has been hit particularly hard with weekly demonstrations often turning violent and resulting in injury and significant damage being caused in the city centre. Petrol shortages and transport strikes threatened for a while to wreck havoc with Euro 2016 but the government’s worst fears do not seem to have materialised. Add to that the murder of two off-duty police officers by an Islamic State sympathiser, the ugly scenes of football hooliganism, the devastation caused by torrential rain and now the fears that Brexit has stirred up and it can safely be said that recent weeks in France have not been easy.

Andrew and Heather Lytle report from France and encourage you to pray for the church, the country, and it’s people.

At the time of the Paris attacks in November, countless thousands of people were telling us via social media to “Pray for France” and perhaps, for a time, some did pray more. But the reality is that France still very much needs your prayers. And the prayer that is most needed relates to France’s greatest problem, one which is not economic, political or environmental. France’s greatest problem is spiritual. People do not know or care about God. Millions of people haven’t the slightest clue about who Jesus is. They understand nothing of the cross. They are living and dying having never heard or understood the gospel. If you are reading this article, it is probably because you care about France and for that we are thankful. And if you care about France, please commit yourself afresh to earnest pleading with God to have mercy on this great country and to pour out His Spirit in a way that would bring gospel transformation to many who are strangers to God’s grace and mercy. While this might come too late for some of you who have already been, if you are fortunate enough to travel in France this summer, please make a point of finding a church to worship in. Encourage your brothers and sisters in Christ by worshipping with them, even if you’ve forgotten much of your GCSE French! Pray with and for the Church here. Tell them you are from Northern Ireland and you’ll be made very welcome! For help in finding a church near where you will be staying, check out this website.

Commemorating The Sacrifice Of The Somme