Mark Neilly Has Been Called To First Ahoghill

Rev Mark Neilly has been called to First Ahoghill Presbyterian Church after a 15-year ministry in Buckna, near Broughshane.
Mark, (46) is married to Hazel, a Classroom Assistant at Hazelbank Primary School. The couple have two daughters, Rebekah, (12) and Abigail, who was born 20 months ago. 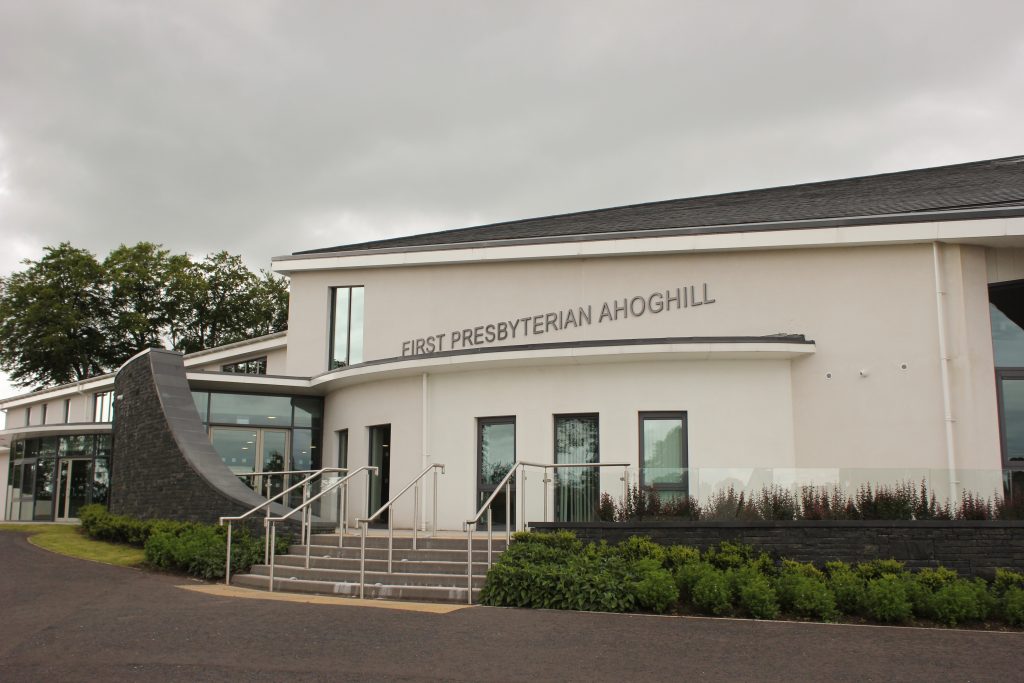 Born in Belfast, Mark attended the city’s Royal Academy Grammar School. His walk with God began much earlier than that however.
He remembers: “I was brought up in a Christian home; my father was the Minister of Immanuel Presbyterian Church. I always knew from I was no size that I needed to become a Christian. I knew that I had sin in my life and I recognised that I needed to be forgiven.”
“A week before my eighth birthday, I remember asking my brother, Stephen, with whom I shared a room, some questions. I asked him what would happen if dad died and he said that dad would go to Heaven. I then asked what would happen to mum, my other brother Paul and Stephen himself. Stephen replied that they would all go to Heaven. I then asked: “Well, what about me?” His reply was: “Well, if you are not a Christian, Mark you won’t go to Heaven.”
“Of course, I knew the answer to that question but I needed to push him on it. I thought about it for a week; it just wouldn’t go out of my head and I remember the day before my eighth birthday I knelt before the side of my bed and asked Jesus to forgive my sins”, added Mark.
Of course, Mark is well-known to everyone in the Ballymena Presbytery area. He served at Assistant Minister under Rev. David Brice at Ballyloughan before moving to First Rathriland where he served for just under four years before taking up the reins at Buckna a decade and a half ago.
What’s more, both his great Grandfather and great, great Grandfather are buried in Ballymena Cemetery.
Speaking warmly about his current ‘charge’, he said: “The people of Buckna are like family to me now and I must say it is extremely difficult picking up and leaving the congregation. However, we always knew that the time would come when the Lord would call us elsewhere. We believe God has shown us that First Ahoghill is where he wants us to be.”
“I suppose the highlight for me having been there for 15 years is seeing children when they were born or at least very young and watching them grow up; seeing those who come to faith and watching them as they mature in their walk with God.”
Talking further about his ministry amongst young people, Mark went on to say: “One of the things that we have worked at very hard over the years in Buckna is seeing the music brought forward.”
“We started a youth choir many years ago and we were able to see the young people who came be trained in how to sing before going into the main choir. We have been able to see young people who started to play instruments in primary school develop and be able to come into our praise group. It has been lovely to see all of that grow and blossom over the years. To have a really vibrant youth scene in the congregation that has been a real encouragement.”
Mark was also Chairman of Vision of Good Hope Moldova for ten years – a role he thoroughly enjoyed.

Rev Mark Neilly has been called to First Ahoghill and told us he is ‘really looking forward to working with the folk there.’

However, time moves on and Mark is ‘really looking forward’ to his new congregation.
He said: “It is a congregation that has been very much on my mind over the last couple of years, maybe even slightly before that, and I think I have felt a draw towards First Ahoghill for a long time. However, I didn’t feel in a position when I was approached before to go forward with them.”
Mark continued: “Since then, I have thought a lot about it. I always thought that it would get filled very quickly, but it didn’t, and I guess the Lord never took that desire away. It now seemed right to allow my name to go forward at this stage and I am really looking forward to working with the folk there.”
Known for his love of preaching and serving God in Church, Mark finds his spare time limited. However, he does enjoy time with his family, particularly kayaking with Rebekah and cycling from time to time.

You can check out Buckna Presbyterian here, where Mark has been ministering for the last 15 years, and find out more about First Ahoghill on their website here.

mark neilly has been called to first ahoghill
Share FacebookTwitterGoogle+ReddItWhatsAppPinterestEmail