For Rev Mark McConnell, the new rector of Ballymena Parish, it was a case of ‘following God’s call’ to Ballymena. He was recently ‘instituted’ as Rector of the Church of Ireland Parish of Ballymena. His new ‘charge’ is a large one, which encompasses the fellowships at St. Patrick’s, (Castle Street), St. Columba’s on the Doury Road and Ballyclug. 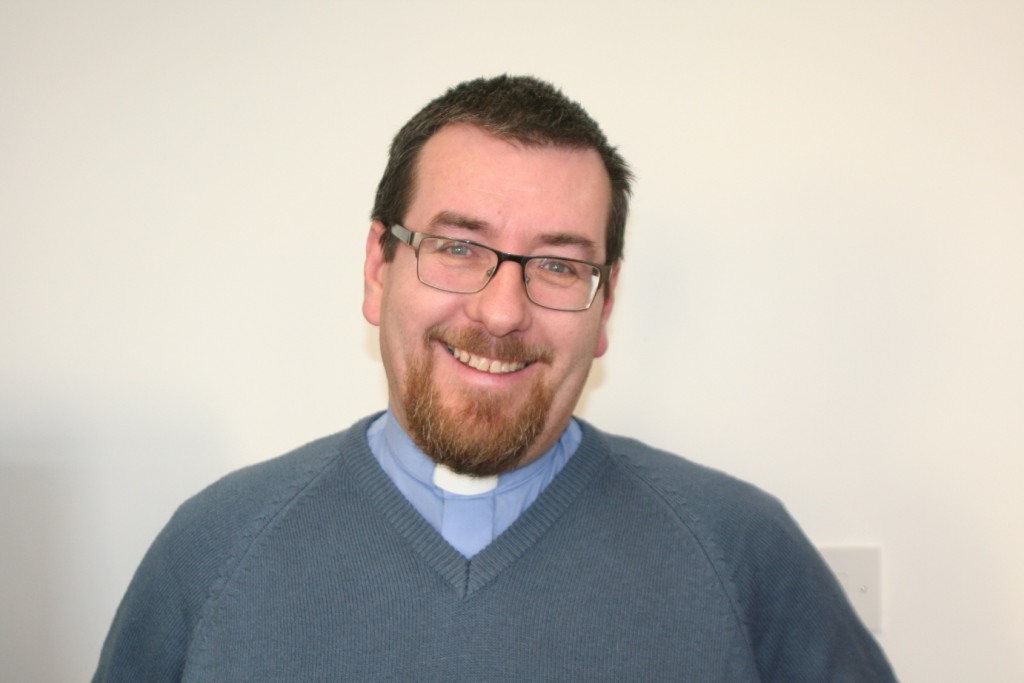 Originally from Lisburn, Mark is a former Civil Servant who accepted Jesus as his Saviour through the personal evangelism from his friend, Eddie, with whom he had grown up.
Taking up the story, Mark said: “We had a conversation one evening and I don’t remember much of it except for one thing that has never left me. Eddie told me: “Mark, do you know that if you were the only person alive, God would still have sent Jesus to die on the Cross to take away your sin His love is so strong.”
Eddie’s words had a real impact on Mark. As he knelt by his bedside that night, he prayed what he described as ‘a terrible prayer’ where he challenged God to ‘show himself because he needed something.’
From that moment on, Mark became a new creation in Christ and his life went down an unexpected road.
He remembered: “Until that point, I was quite happy in my job and had been promoted a couple time times. Then, the joy of going to work evaporated overnight and, for a while, I couldn’t work out what was going on.”
“So I went to see my Minister, who was a lovely, Godly man called Rev. John McCammon. He told me that we could test the call and over a period of time, doors opened for me that I could never have expected.”
Eventually, Mark found himself at Oakhill Bible College in London. One of his fellow students there was Dungannon man, Derek Kerr, who is Vicar of the Parishes of Drummal, Duneane and Ballyscullion, near Randalstown.
Talking about the wonderful experience he had in the Godly environment at Oakhill and his ‘call’ to pulpit ministry, Mark went on to say: “We were all put in small groups when we were in Bible College looked after by various lecturers. Mine was a lovely man from Chicago, a Lutheran Church History Lecturer called Rudolph (Rudi) Heinz.”
He added: “Rudi and his wife, Mildred took me and another four or five fellas and girls in and it was really through praying with and talking to Rudi and Mildred that they began to discern that there was a possible on my life to enter the ministry of the Church.”
“Again, I didn’t trust myself and I still don’t really trust my own feelings I wanted to test that before God and let His sovereignty be the deciding factor.”
Courageously, Mark did this by writing to all the Church of England Bishops and eventually was invited to meeting with the Bishop of St. Alban’s.
Subsequently, he was successful in the selection process for that diocese who agreed to sponsor the rest of his time at college and give him a Curacy to complete his training when he finished his studies.
After graduating, Mark gained fantastic experience working at St. James’, Muswell Hill before becoming a Curate at Church of England congregation in Bedford town.
God then used the tragic events at Enniskillen on Remembrance Day 1987 to call Mark and his wife back to home shores.
Rev Mark McConnell explained: “We were sitting in a flat with a girl whose mummy and daddy were in that parade. We were both struck by God in that moment that it is our home and this is where we belonged and this is where He required us to be.”
After another period of learning and development in Bangor, County Down, Mark became ‘Priest-In-Charge’ at a Church in Killyleagh outside Downpatrick.
Seventeen years in Ballynure followed before Mark felt God leading him to Ballymena.

Rev Mark McConnell, the new rector of Ballymena Parish, preaches at his first services in the town.

Discussing his ‘first impressions’, he confided: “I have met a lot of lovely people in the Church; most of whom I don’t know yet and I don’t know their names but there is a friendliness and there are been a welcoming and encouraging spirit amongst the folk that I have met so far.”
“My very first Sunday comprised of an 8.15am Communion Service, a big joint Communion Service where all three churches came together at 11.30am in St. Patrick’s, the place was bunged and then a very unusual, not often celebrated service in the evening of Choral Evensong. I was thrown in at the deep end to sing that gathering which is something I haven’t been part of the over 30 years”, he smiled
“More importantly through all of that, I felt a liberty to preach the Gospel and I spoke about one of my heroes in the Bible who is John the Baptist, a man who never wanted to occupy centre stage, he only ever wanted to point people to someone else, the one who are coming. I preached that word to the best of my ability and I just pray that my ministry in the Parish of Ballymena will have elements of John the Baptist to it; that I will always point to Him and not myself. That I will be brave to stand out from the crowd as he did when asked to defend and stand up for my faith. I am aware that in Christian Ministry and Christian life in general, there is both glory and hardship”, said Mark.
Outside Church, Mark is a keen Tottenham Hotspur fan. He and Cherith have three children, Daniel, Matthew and Erin.