Joe and Sadie Law gave us the latest Mission Possible project report from Colombia after returning from their recent trip.

On 30th March 2016 a group of seven people from Northern Ireland travelled to Bogota to see the progress of the Mission Possible projects and in particular to take part in the inauguration ceremony for the new Hope House for girls and also the new Cultural Centre.
Mission Possible chairman, Joe Law and his wife, Sadie, were part of the travelling group. In the following article the couple reflect on the latest expediton to South America. 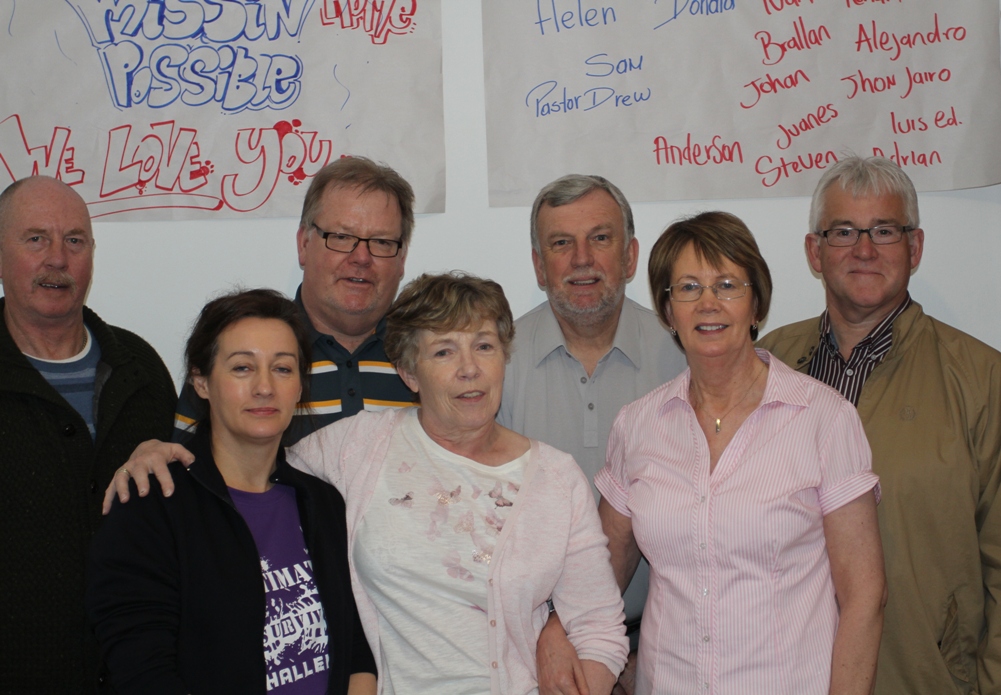 “Work within the Hope House 1 residential home for boys is progressing very well.

We praise God that three boys have moved on to University and these spaces were filled with three new boys at the end of January 2016.

One such boy is Junior who is twelve years old. As a young child, Junior witnessed some horrific things. At the tender age of nine, he saw his own father being murdered. His mother was heavily involved in drug dealing, stealing and kidnapping and little Junior was being trained to do likewise. A pastor got to hear about the plight of Junior and referred him to Hope House. Junior’s situation is typical of the children in Hope House who have been rescued and given hope for a better future, away from the evil and perils which have robbed them of their childhood.

Every effort is being made to eventually make the home self funding. The boys bake all their own bread and whatever is left over is sold to neighbours and Church members. Although very cramped for space, they have also started to grow their own vegetables”, said Joe

He went on to say, “The ceremony to open the new Hope House 2 for girls was such a blessing.
We were amazed to find the amount of renovations which had been carried out in such a short space of time to make it suitable for little girls to live in. A new kitchen had been fitted, new bathrooms and new bunk beds.

We were really surprised to meet five little girls who were rescued from very traumatic situations and had already been admitted to the home on Monday 28th March. Another girl was due to move in to the home a few days after we left. We had no idea that such progress had been made and this was truly an answer to many prayers. This will be a haven of love and care for such girls. To all who helped fund this new home, on behalf of the girls we say a big thank you.

For security reasons, the new Outreach Centre in Juan Rey will be called a Cultural Centre. It will be used for various Christian activities by residents in this area including a Church service every Sunday. The construction work is over 80% completed and the remainder will be finished in the summer.

The inauguration ceremony went ahead on Sunday 3rd April and what a privilege to attend such an event – to meet some of the families and their children from this poverty stricken district was such a humbling experience.

One of the purposes of this centre is to replace the old cramped rented building which is currently used primarily as a Feeding Centre to provide 85 children with a nutritious meal every day. Our aim is to demonstrate God’s love by providing up to 300 children with a meal every day in the new Cultural Centre. They will also be told about God’s love and His plan for their salvation. This is our goal, to reach a target of 2,100 meals per week. Please pray that God will bless the efforts of all those involved in the Juan Rey project and that we can see this objective achieved.”

It’s good to read about the work being done in Bogota in the Mission Possible project report from Colombia, but there are also changes being made closer to home.

“Mission Possible was formed on 1 June 2006 and our Charity Shop in Portglenone opened on that date. During these 10 years we have been amazed at how God has blessed our efforts and with your help, how He has enabled us to help many little children in Colombia.

After much prayer and consideration, God has led us to concentrate our efforts more on various fund raising initiatives and therefore the shop in Portglenone will no longer operate as Mission Possible. We are delighted to inform you that One Mission Society (OMS), who partner us in our work, have agreed to take over the shop with effect from 1 June 2016. However, a good number of the shop volunteers will continue under the O.M.S. banner.

I would like to take this opportunity to thank all the volunteers who have helped Mission Possible over the last ten years. Whether it has been in the shop, the store, or in the van, your Ministry in this way is greatly appreciated. We may never know the impact which you have made in the lives of Street Children some 6,000 miles away, until we reach Heaven’s Glory.

I would emphasize that we are not retiring. We are changing our direction on how we raise funds for our projects. The Charity shop in Strabane will continue to operate as Mission Possible, with Iris Ballantine as shop manager. We thank and praise Iris and her team of volunteers for their continued efforts and for the blessing that they are to the Mission.

We need your help. Many of the children from the poorest areas of Bogota are involved in child labour, drug trafficking, recruitment for armed conflict, pornography, child trafficking, prostitution and many other illicit activities. With your support we can help to alleviate their suffering by being the hands and feet of Jesus – showing His love in practical ways and introducing them to the good news of the Gospel.
Please prayerfully consider making a monthly or one off donation in order for us to continue funding these projects. You can make a cheque payable to Mission Possible and post to our office at 7 Mansefield Heights, Portglenone, BT44 8JR. You can also pay on-line using the Give Net facility here.

All support, both prayerful and financial will be gratefully accepted.”

After reading this latest Mission Possible project report from Colombia, it’s clear God is working there and blessing the work they are doing. To find out more about the work of Mission Possible in Colombia go to their website here.

“Little is much when God is in it”

Short Service At The Augustinian Monastery At Kells