A debut CD by Lynda McKillop – Just Have Faith will soon be available for sale. The Bushmills housewife is inviting everyone to the launch of her debut Gospel CD, Just Have Faith, on Friday, 3rd June 2016 at Portstewart Town Hall. Doors open at 7.30pm. 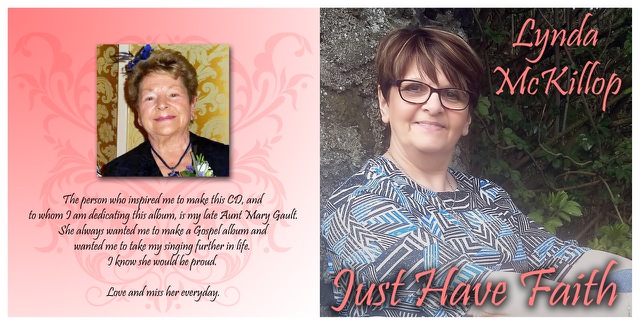 Lynda, (57), has been singing since she was 14-years-old. Her late father, Tommy Galbraith performed with a country dance band for 51 years and she would have often performed some of her own favourites from that genre during their concerts.
One very special song was ‘The Old Country Church’ which appears on her album, alongside ‘The Old Account’ and the scripturally-inspired, ‘Consider the Lillies.’
Although, ‘Just Have Faith’ is Lynda’s first solo recording, she featured on a country record which was made at Clive Culbertson’s studio seventeen years ago before she became a Christian.
Says Lynda: “Recording my own album is something I have always wanted to do but only now have I plucked up the courage to do it.”
“It is dedicated to my late aunt, Mary Gault, a wonderful wee Christian lady, who passed away suddenly four years ago. This was recorded in her memory and she will be with us in spirit on Friday night”, smiles Lynda.
Also joining Lynda at her album launch will be local Radio North Presenter and singer, Martin Moore, who wrote the title track on her record.
The other performers on stage will be Parker Donnelly and Scottish songstress, Anita McDonald.

You’ll be made very welcome if you come along to the launch night of the debut CD by Lynda McKillop – Just Have Faith. Takes place on Friday, 3rd June 2016 at Portstewart Town Hall. Doors open at 7.30pm.

As you would expect Lynda is ‘very excited’ about unveiling her compilation. The proud wife, mum and granny is looking forward to seeing you next Friday evening.
Admission is free and copies of the Just Have Faith CD will be available to buy on the night, priced £10.
Afterwards, it can be bought from a number of local outlets including ‘McKillop’s Motorcycles’ in Derrykeighan, near Ballymoney.