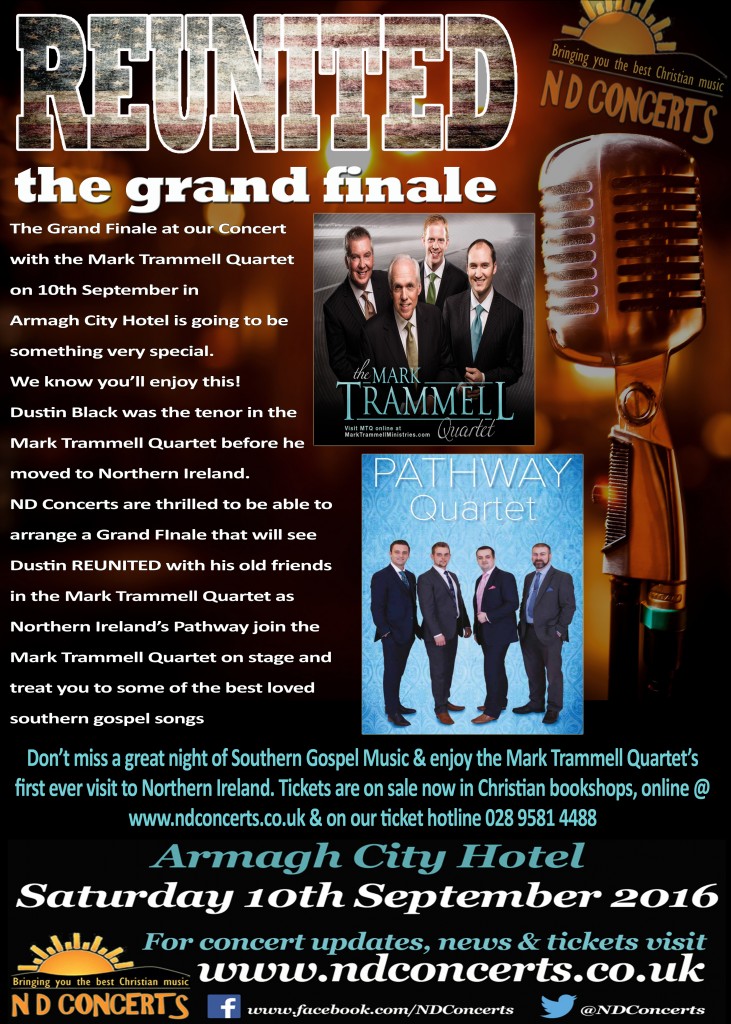 The event will allow fans of Gospel music to enjoy one of America’s top Southern Gospel groups, but this concert has a Northern Ireland connection that has led to concert promoters, ND Concerts, arranging a remarkable partnership with Northern Ireland’s Pathway and The Mark Trammell Quartet joining each other on stage for a Grand Finale which organisers have billed – REUNITED.

Dustin Black, now the tenor with Pathway and a talented singer/ songwriter in his own right, was a member of The Mark Trammell Quartet until he got married and decided to move from USA to live in Northern Ireland and use his talents in the music ministry on these shores. ND Concerts are thrilled to have been able to arrange a Grand Finale that will see Dustin reunited with his old friends in The Mark Trammell Quartet as the Pathway Quartet, who are about to release a new album, join one of America’s premier groups on stage to treat the audience to some of the best loved Southern Gospel songs and bring the concert to a close. Dustin comments “I was privileged to sing with Mark and the guys for 2 1/2 years. I met a lot of wonderful people during those years, most importantly, my wife Rachael! I am so thankful for the time and effort that was invested in my life by Mark Trammell Quartet. It is something I’ll never forget.”

Commenting on this partnership Pathway’s George Strange said “We are not only a Southern Gospel group but each of us are massive fans of the genre meaning we really appreciate the quality of The Mark Trammell Quartet. As huge fans we were looking forward to seeing them in concert in Armagh in September but to be given the opportunity to join them on stage and sing with them is just incredible.
Obviously with Dustin’s links it makes it just that little bit more special for Pathway. We really appreciate being given this opportunity by ND Concerts & The Mark Trammell Quartet & look forward to a great night in September. With a new CD releasing in June, and the opportunity the share in a finale with Southern gospel legend Mark Trammell and his quartet, the guys in Pathway have much to look forward to and are excited at the doors that are opening for their ministry.” Catch up with Pathway on their Facebook page here.

Speaking on behalf of ND Concerts, Charles Robinson, Promoter, said “We are privileged to be hosting The Mark Trammell Quartet in Armagh on Saturday 10th September 2016. ND Concerts is a non-profit making organisation. Any profits made from this concert will be re-invested in bringing other top artists to Northern Ireland for Gospel music fans to enjoy. That’s why we do this and that’s why we are already working on plans for 2017 & 2018. We are Gospel music fans ourselves and are committed to giving people the opportunity to enjoy the best Christian artists and groups. This concert with The Mark Trammell Quartet is going to be fantastic and with the local links between Dustin, Pathway and The Mark Trammell Quartet we came up with the idea of reuniting Dustin and his new group Pathway with the quartet he travelled across America with for almost 3 years. We are sure this grand finale will bring our concert to an amazing conclusion and we just count it an honour and a privilege to be able to give the people of Northern Ireland and further afield the opportunity to enjoy a night of superb Gospel music.”

Mark Trammell says the group are looking forward to travelling over to Northern Ireland for their first visit here. “We are beyond excited to share our music and its message on our first trip to Northern Ireland! We are looking forward to seeing old friends, and making new ones during our visit. We appreciate all the work everyone is doing to help promote the event! If you haven’t done so already, reserve your tickets today!”

The concert, including Pathway and Mark Trammell Quartet REUNITED for the grand finale takes place on Saturday 10th September 2016 in the Armagh City Hotel. Tickets are now on sale, reasonably priced at £13 and can be purchased from Christian bookshops throughout Northern Ireland, online at the ND Concerts website here or via the ticket hotline 028 9581 4488.