Ballee Presbyterian 40th anniversary celebrations took place on Sunday 3rd April 2016 when members of Ballee Presbyterian Church celebrated this milestone since the opening service of the Congregation back in 1976.
Joining them for the morning service were The Moderator of the General Assembly, The Rt. Rev. Dr. Ian McNie and his wife Ann.
Welcoming the Moderator, the Minister of Ballee Presbyterian, The Rev. Joseph Andrews said:
“We have been praying for you during your year of office and we have been praying specifically for your visit today and for the preaching of the Word. There is no better way to celebrate 40 years of the life and work of Ballee than to have Ann and yourself with us. Thank you for accepting our invitation.” 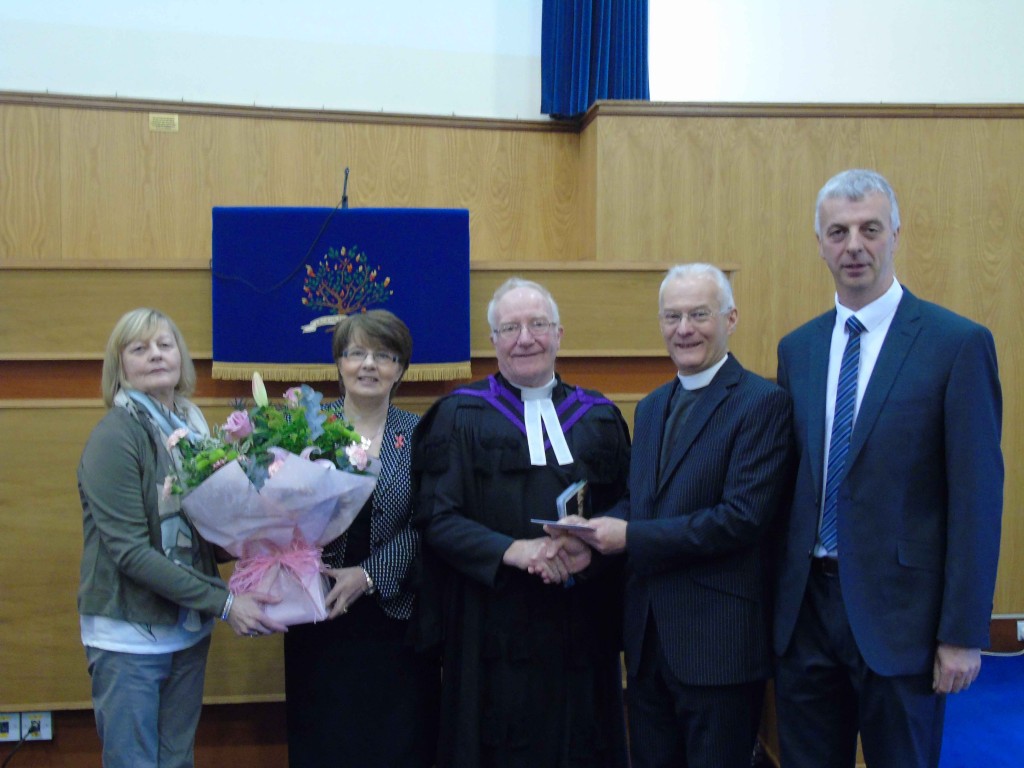 Dr. McNie brought greetings to the people of Ballee from the General Assembly of the Presbyterian Church in Ireland, assuring them that they were a valuable and important part of the denomination.
During the service, Dr. Ian McNie preached from the Book of Nehemiah, Chapter 1 on the rebuilding of Jerusalem’s walls. Speaking before he said, “I was told that when laying the foundation stone at Ballee, the Rev Tom Simpson, Deputy Clerk of the General Assembly, said at the time, ‘In this place may true faith flourish, the fear of God, the love of brethren. Here may the voice of prayer continually be heard, the voice of rejoicing and salvation, the voice of praise and invocation of Thy most glorious and honourable name, in the name of the Father, and of the Son, and of the Holy Spirit henceforth and for evermore.’ I am very glad to say, that by God’s Grace, this is exactly what has happened. I am very pleased to be in Ballee today celebrating 40 years of Christian witness and the impact it continues to make in the local area. I am also looking forward to talking part in September’s Gospel outreach,” Dr. McNie said.
Praise was led by the Choir and Orchestra with input from “Bon Accord”, a ladies singing group within the congregation, and Mr. Stephen Rankin, who played a flute solo. The Rev. John McCullough, who was Minister of Ballee Church Extension Congregation from 1977 – 1986, read the Scriptures. Mr. John Quigley, Clerk of Session, led in prayer. Presentations to Dr. and Mrs. McNie, on behalf of the congregation, were made by The Rev. Joseph Andrews and Mrs. Debbie Quigley. Following the Service lunch was served in the Church Hall, organised by Mr. Adrian Fleck.
Speaking after the service The Rev. Joseph Andrews said: “Ballee is one of the smaller congregations of the Presbyterian Church in Ireland and to have the Moderator of the General Assembly with us at a very important milestone in our life and work has underlined the fact that we are a valuable part of the Church. Over a year ago we issued the invitation to the Moderator to attend this service and we are delighted that Dr. McNie and his wife could join with us on this occasion. All of those present were greatly encouraged by the Moderator’s attendance, greetings and message from God’s Word.”
In the evening members of the congregation and friends and visitors gathered for a Praise Service. Once again there were contributions by the Church Choir and “Bon Accord”. Mr. Stephen Rankin rendered a flute solo and Mr. David McConaghy sang two solos. The Scriptures were read by Mr. Roy McCullough and Mr. James Lamont, both of whom were present at the opening service in 1976, and Mrs. Stephanie Houston, who was one of the most recent Communicants admitted to the Lord’s Table. Mr. Andrew McCullough, a member of Ballee who works with the Faith Mission, led in prayer. A presentation was made to Mr. Betty Wilson in recognition of over seven decades of service to music in the worship of God. Mrs. Wilson sang in the Choir at the opening service in Ballee. The speaker was The Rev. Joseph Andrews.

“A lot of people in Ballee worked very hard to prepare for this special day. A great debt of thanks is owed to everyone of them. Much prayer was offered for these services and we are grateful to Almighty God for graciously answering. The 40th Anniversary Services in Ballee will be long remembered by those of us who were privileged to be present, and have laid a solid foundation for our Mission event which will take place from 4th to 11th September this year. Dr. Ian McNie will be returning as our main speaker, The Rev Albert Baxter will be speaking at a Men’s Breakfast and Mr. Jonathan Boyd at a Youth Evening. Mrs. Ann McNie will be speaking at an event for ladies. We now look forward from our 40th Anniversary Services to our forthcoming Mission.”

You can find out more about the Ballee Presbyterian congregation on their website here.