Andrew and Heather Lytle – Reaching out with the Gospel in Nantes

Ballymena missionary couple, Andrew and Heather Lytle and their young son, Mattieu are currently working with Église Réformée Évangélique d’Orvault – Orvault is a suburb of Nantes.
The family are serving with the Reformed Presbyterian Church of Ireland Overseas Mission. 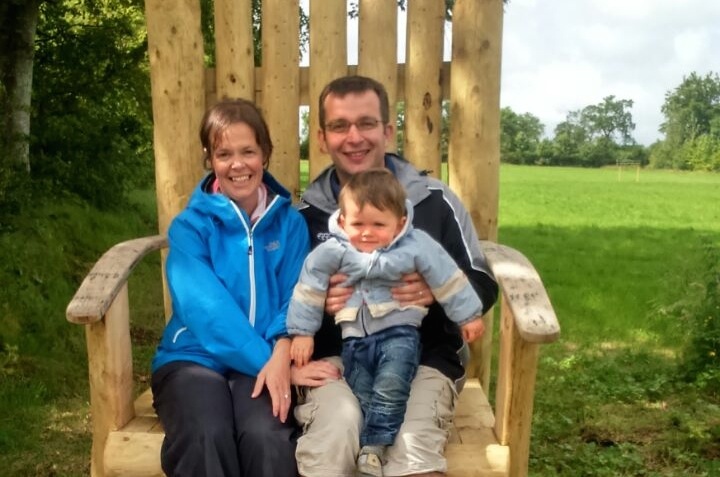 Andrew and Heather Lytle report on their outreach around Nantes, France.

“In a few weeks, our church will be distributing around 40,000 evangelistic leaflets in the different neighbourhoods and towns in the northwest part of Nantes in the west of France. We prepared the leaflet ourselves and it is one of our principal means of making contact with a large mass of population. The gospel is clearly presented, we advertise up-coming events and Bible studies and offer a free Bible or other Christian books. Typically we get 10 to 15 replies. 15 would be considered good. As we prepare for this major event in our calendar, perhaps the main challenge for us lies in the fact that there are so many types of soil on which we sow the seed of the Gospel. There are so many different world-views which shape the hearts and minds of those who will, we hope, read our leaflet.
There are the affluent neighbourhoods where we sow on the soil of materialism and outward image. What matters is how you are seen and perceived by others. We drop leaflets into the letterboxes of beautiful houses but often think as we do so that behind the four walls there is often brokenness and misery. Yet many in such a state are too proud to admit that the gods whom they have served have left them down. Many in France are worshipping at the altar of the god of “stuff”.
Then there is the soil of traditional, works-based religion. Many are basing their eternal security on their belonging to their church, their observance of rites and their going along with what their church requires of them. This is essentially a religion of works and not of grace alone by faith alone in Christ alone. Many in France have grown up being forced to follow the traditional religious upbringing which, over time they came to reject. They have had an encounter with organised religion but rarely with the risen Christ. They think they have rejected God but they have rejected stale formal rites and observances, devoid of any spiritual reality.
There is the soil of atheistic humanism where the idea of a creator God has been rejected centuries ago. If it can’t be seen and touched and proven in a laboratory, it simply can’t be believed.
We are also sowing on the soil of relativism. There’s no such thing as ultimate truth. Your religion is good for you but mine is equally valid. We simply can’t say that there is just one true way, truth and life.
And then is also the soil of Islam and many of the areas around our church are largely Muslim areas. There is no problem convincing our Muslim neighbours of the existence of God, of creation, heaven or hell. But for all their zeal and sincerity, we know that no one can come to God the Father except by Jesus Christ.
There are or course other types of soil that we could describe but we take it you get the picture. Please pray that in the weeks ahead, the precious seed sown would fall on good soil and bring forth a great harvest of spiritual fruit.”

For more information on what Ballymena missionaries Andrew and Heather Lytle are doing or the Reformed Presbyterian Church in France, log on to their website here and blog here.

The Leadership Swamp | One Day Seminar For Leaders